As they beat the mother of four, LAPD officers repeatedly yelled at her to give them her arm and to “stop resisting” but due to her disability she was unable to unpin her arm voluntarily 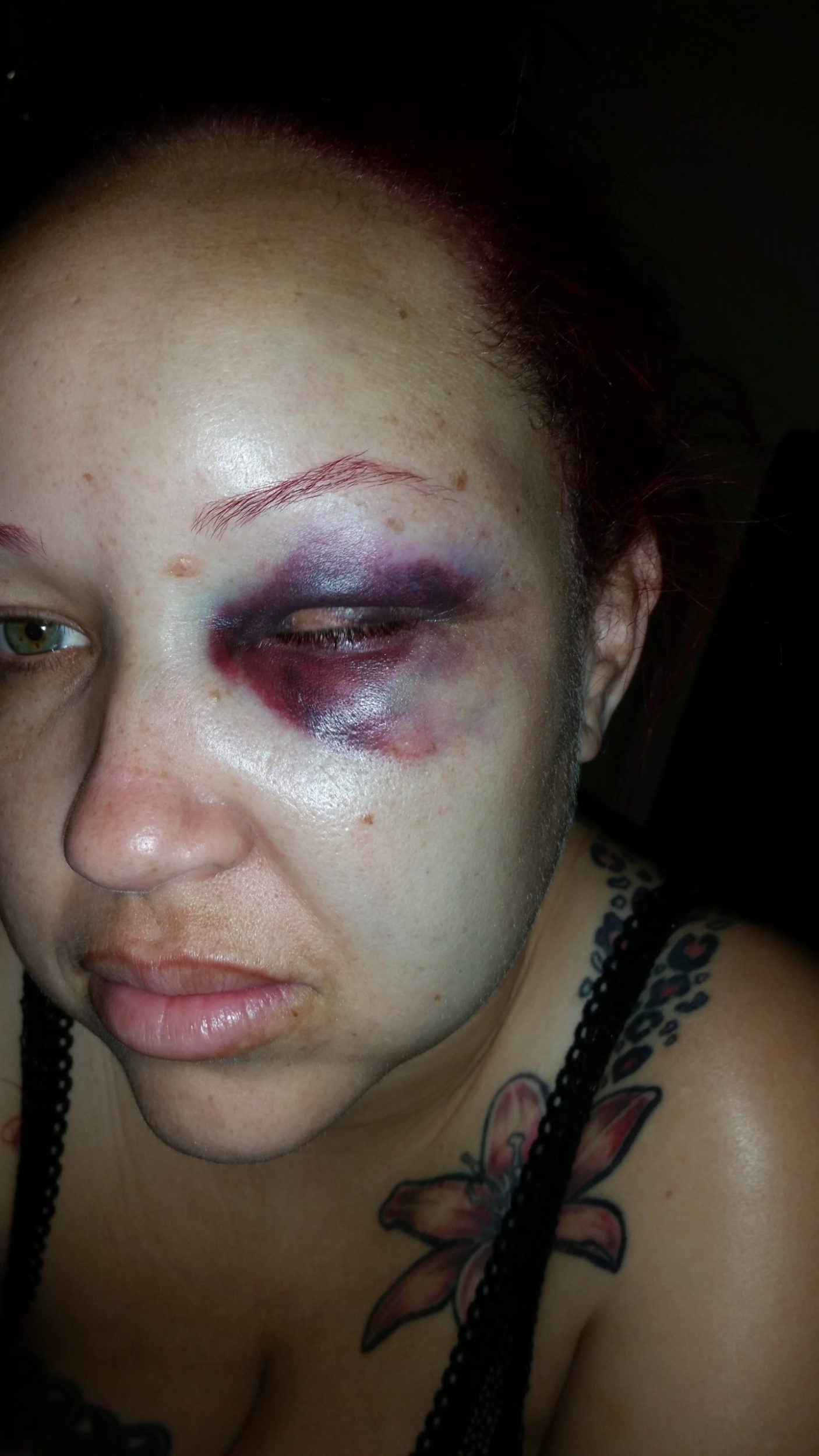 As they beat the mother of four, LAPD officers repeatedly yelled at her to give them her arm and to “stop resisting” but due to her disability she was unable to unpin her arm voluntarily

Opening statements are scheduled to take place in Los Angeles this week in the civil trial (Case No. BC621315) of a disabled woman who alleges that in 2015 a Los Angeles police officer repeatedly punched her, including in the face, and pinned her non-functioning arm underneath her body.

Zennea Foster, who was born with Erb’s Palsy rendering her left arm and hand immobile, is suing the Los Angeles Police Department for civil rights violations, assault and battery after she says she was viciously beaten by several LAPD officers in South Los Angeles in 2015.

“Never in my over 37-year career have I ever heard of a woman being beaten as badly as Zennea Foster was on February 4, 2015,” said Foster’s counsel attorney Carl Douglas. “The Defendants concede that they are responsible for her battered and bruised face. One of the Defendants who was recently deposed admitted that he could think of only one other time in his 27-year police career of a police officer punching a woman two times in the face. Another officer–a sergeant–conceded that he had never over the course of his 21-year career ever heard of a police officer striking a woman twice in her face. Another officer conceded that he had never encountered another incident in his nine-year career of a woman being punched twice in her face by another officer. That officer stands at least nine inches taller than Ms. Foster and weighs at least 60 pounds more than her and just heightens the outrageousness of his actions. That she is disabled and physically unable to have done the things that she was alleged to have done serves to increase the maliciousness of her attack.”

Ms. Foster alleges that on February 4, 2015, she was called to her property in South Los Angeles that she rents out to several tenants who live on a fixed income.  At the time of this incident, Ms. Foster was a college graduate and mother of four who had worked for over 18 years for the Los Angeles Unified School District as a Special Education assistant.

Witnesses say one police officer says, “Nice bike, we’re taking it.” The boyfriend responds by asking why and says “That’s not what you’re here for.” A police officer asks, “Who said that?” and then says, “Cuff him” and the police handcuff the boyfriend.

Ms. Foster, who only stands 5’3”, proceeds to tell the officers that she’s the owner of the house and that the suspect is no longer here. Witnesses say an officer responded by saying that he didn’t care.

By this time, all of Ms. Foster’s tenants were outside standing on the porch. Officers then instructed everyone to move to the damp grass.

A few minutes later, Ms. Foster called her tenant, the alleged suspect of the initial stabbing incident. Ms. Foster then turned to the officer closest to her and said, “Here’s the person that you’re looking for. Do you want to speak to him?” She extended her hand out to hand him the cell phone. The officer shook his head, indicating “no” to her request. She then asked another officer the same thing, also reaching her hand out in an attempt to hand him the phone.

Ms. Foster then walked around the railing on the porch to get to the front door to enter her home. She wanted to find another officer who would be willing to speak to the alleged suspect on the phone. Since she had seen her sick tenant enter the home without incident, she believed she would be allowed to enter her home as well. She walked past two officers and then up the porch and into her home.

Ms. Foster contends that after walking into her home, the officer who told told her, “I don’t give a fuck!” grabbed her and turned her towards him. Ms. Foster said “Get your fucking hands off me … ”  after which the officer punched her in her face with his closed fist.

Ms. Foster responded by striking the officer once with her right hand while holding her cell phone and car keys. The officer then punched Ms. Foster in her face a second time. Ms. Foster states that another officer ran in from outside her house and both officers began hitting her. The force of the blows caused her to fall to the floor. She noticed other officers coming from down the hallway. While on the floor, Ms. Foster states that she was kicked at least three to five times. She recalls being kicked in the back. She states she was kicked on the left side of her face by a tall officer with reddish hair.  One of the officers had a knee in her back, another had his shoe on the right side of her shoulder, and an officer was also holding her right arm in the air. At some point she lost count of how many times she was struck.

While on the ground, Ms. Foster’s left nonfunctioning arm was pinned under her body. The officers kept instructing her to, “Give me your arm.” and to, “Stop resisting.”  However, due to her disability, she was not able to unpin her arm voluntarily. She maintains that any “resisting” from her at that time was merely her body squirming on the ground as the officers were hitting and kicking her.

At this point, the sick tenant came out of a nearby bathroom and began screaming at the officers striking Ms. Foster and yelling at her to give them her left arm.

“She can’t move it. She has a disability,” she screamed.

Ms. Foster was also yelling “I can’t breathe. I can’t breathe. I feel like my arm is broken. I cannot move my left arm. I have a disability.” The officers then start forcing Ms. Foster’s right arm in an attempt to get her to give them her left arm, but she couldn’t move anything at that point. Two officers grabbed her left arm from under her body and moved it to the small of her back. They were trying to force her arms together but she kept saying, “I have a disability. My arm doesn’t move like that.”

One officer put a hobble restraint over her legs.

When the officers finally realized that they couldn’t handcuff her two wrists together, they tried to hog-tie her arms with her the hobble restraint, but were not successful.

While still in handcuffs, an officer asked Ms. Foster “Why did you hit a cop?” She responded that, “The cop hit me and I hit back.”

Later that evening, Ms. Foster waived her Miranda rights and answered every question that a use of force investigator had asked about the incident. She told the detective that she had struck officer in self-defense, after he had punched her first. Four days later, she filed a four-page citizen’s complaint against the officers describing the same sequence of events.

The criminal trial included dramatic testimony from Ms. Foster’s sick tenant who described the look on the officers’ faces when she emerged from the bathroom and began screaming at the officers as she saw them striking and kicking Ms. Foster.

Ms. Foster testified on her own behalf and introduced an audio recording that had been made of her telephone call her tenant involved in the initial stabbing. That recording captured her conversation, as well as the horrific beating which followed. Along with the sounds of her screaming out in pain as she is being attacked, one can hear on the recording the rhythmic cadence of someone kicking her body.

After a two-week trial, on December 24, 2015, the jury returned a special verdict convicting Ms. Foster of delaying officers. The jury was unable to reach a verdict on the battery charge.

Attorney Carl Douglas continued, “Ms. Foster told everyone who spoke to her that she hit the officer in self defense after he hit her first. Indeed, on the evening of the attack, she waived her Miranda rights and answered every question the detective asked concerning the incident, explaining that she had hit the officer only after he had punched her first. She repeated that description days later when she filed a citizen’s complaint against the officers, and again when she testified under oath at her criminal trial.”

Douglas added, “Almost anything that a person does to protest some action, can be interpreted as delaying an investigation. In Ms. Foster’s criminal trial, the jury concluded that she delayed the  police investigation of her own home by walking into her house attempting to find an officer who would take the phone and speak to the suspect they were looking for. After speaking with the jury foreperson, an African American  woman, it is clear that a majority of the jury blindly accepted the police’s version of what had happened as opposed to the civilian witnesses who testified on Ms. Foster’s behalf. In spite of that setback, I vowed to continue my fight, my efforts to vindicate Zennea’s rights and that’s what this civil lawsuit is all about.”