Tenants Facing Eviction in South L.A. Agree to Mediation With Landlord and City

At issue is relocation money and time for the nearly one dozen tenants who were unaware that the woman they were renting rooms from in a dilapidated ramshackle house in Los Angeles on the border of Inglewood was being evicted. 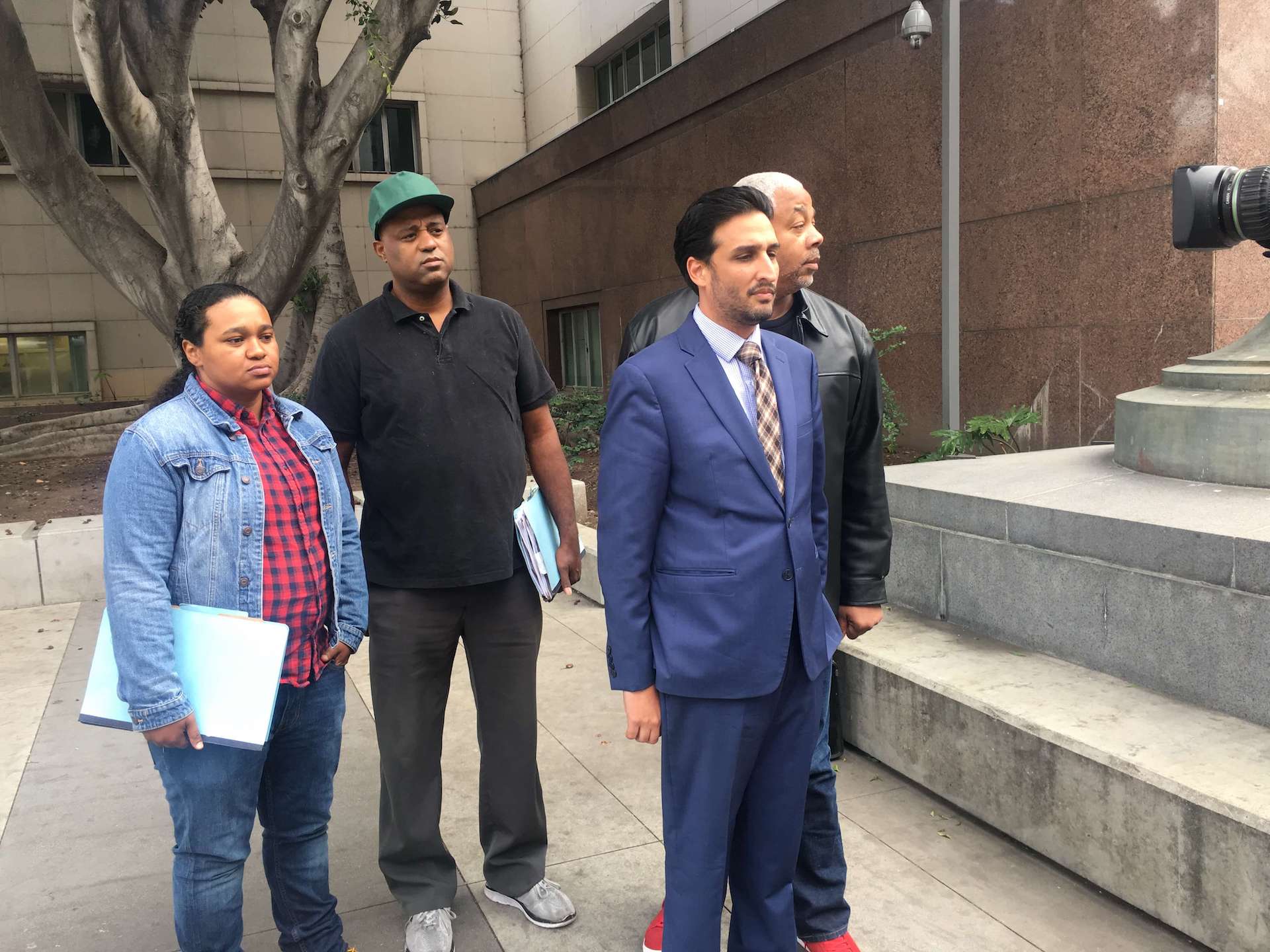 The nearly one dozen tenants facing eviction in South Los Angeles after a transitional housing manager failed to pay rent and abandoned the property will have to return to court after attorneys on both sides agreed to a continuance on Friday.

Friday’s hearing was an effort to stop the eviction on the grounds that the tenants had had no notice of the unlawful detainer filed against the transitional housing manager who left and didn’t tell them she was being evicted.

After neither side could come to an agreement in the hallway outside of Los Angeles Superior Court’s Department 94 also known as Eviction Court, Judge Lisa K. Sepe-Wiesenfeld ordered the two parties back to court on Mar. 29. A mediation between the tenants, landlord and the City of Los Angeles’ Housing + Community Investment Department (HCIDLA) is scheduled for Mar. 27. If no agreement is made, the parties will return to court on Mar. 29.

At issue is relocation money and time for the nearly one dozen tenants who were unaware that the woman they were renting rooms from in a dilapidated ramshackle house in Los Angeles on the border of Inglewood was being evicted.

Prior to Friday’s court appearance an offer of $50,000–to be split evenly between the tenants–was at one time under consideration. That offer was followed up with $2,000 and 90 days to vacate. Both offers from the landlord Izydor Wilchfort came with the stipulation that the tenants must waive their right to sue him in the future–something the tenants say they shouldn’t be made to do.

A letter sent to the tenants from the HCIDLA said that the tenants could be eligible for as much as $8,050 to $20,050 in relocation assistance.

“Ms. Wilkerson did not pay the rent in response to the three-day-notice and was served a Summons and Complaint,” explains Elena Popp with the Eviction Defense Network. “Attached to the summons and complaint was a Prejudgment Claim of Right to Possession. No prejudgment claimants came forward because Ms. Wilkerson withheld the information. She agreed to give up possession in a Stipulation for Judgment. Because a prejudgment claim was served with the Summons and Complaint, even though Ms. Wilkerson never told any of the tenants about the service, there is no way for any of them to bring themselves into this litigation.”

Popp sheds light on an old law that says landlords can evict everyone living in a home just by serving notice to one person–even if that one person doesn’t tell the others, as is the case with Wilkerson and her subtenants.

“This is a defect in the law,” Popp continues. “It is a complete violation of due process. The history of it is complicated but yes, our State Legislature has seen it fit to pass a law that allows a landlord to collude with a master tenant to evict all of the tenants and subtenants without due process. The owner knew or should have known that there were 12 tenancies here but was allowed to only serve Ms. Wilkerson. The court is taking the position that as subtenants, their claims are against Ms. Wilkerson, not against the owner. The owner has offered 60 days to move out if the tenants waive all their claims against the owner including any claims for relocation assistance.”

A 19-page city inspection report dated Feb. 20, from the HCIDLA shows dozens of violations were found at the house on Crenshaw. Among the citations were the use of an enclosed porch as a bedroom, broken windows, plumbing blockage, termites and dry rot, broken or missing electrical switches, loose guardrails, hazardous, unapproved, defected or improperly installed receptacle outlets, missing smoke detectors, defective or missing room heating appliances, unapproved plumbing, and dampness in rooms. In addition, there are visible signs of mold, roaches and bed bugs throughout the house.

The tenants of the house on Crenshaw–which include Social Security (SSI) and General Relief recipients, developmentally disabled, mentally ill, autistic, stroke victims, and working adults who just can’t afford the high cost of rent in Los Angeles–say that they rented beds shared rooms for between $175 to as much as $1,000 a month from Giovanna Wilkerson. Several tenants claim they were brought to or referred to Wilkerson by a hospital. One hospital’s name that is repeatedly mentioned is Silver Lake Medical Center, an acute psychiatric hospital and mental health center in Rosemead.

Current and previous tenants say that in exchange for renting a bed, Wilkerson demanded access to their debit card numbers, pin codes–including for their Electronic Benefit Transfer or EBT which is used in California is to issue food stamp and cash benefits to recipients. Tenants say she solicited them online, in front of the Department of Public Social Services and on Skid Row at homeless shelters including the Downtown Women’s Center.

“We don’t ask to [hold] onto cards as most program [sic] do. They will say their funds didn’t hit the card, and attempt to live for free, smoke or drink their money up. Poor choices rather than housing being a priority.”

An investigation into Wilkerson has produced several other homes in South L.A. where she is currently running what she calls a ‘transitional housing’ or ‘sober living’ program where she targets indigent and low-income people. In one home she’s currently housing as many as 40 adults between two five-bedroom apartments on the same property. In another home in Watts where she keeps her office in the garage, Wilkerson is housing adults and families.

During a texting conversation in 2017 where Wilkerson was trying to convince a family to rent their South L.A. property to her, she bragged, “I’ve opened up 9 others homes while waiting on u [sic].”

The family says she was “super aggressive” with them, reaching out regularly unsolicited for approximately the past five years trying to rent their properties but that they weren’t interested in her “hustle.”

About the programs the tenants say they were promised, Wilkerson responded, “What services? We provide month-to-month housing. Guaranteed refrigerator and stove.”

“Not really concerned what the public thinks,” Wilkerson said in an email on Tue. Feb. 27. “The house on Crenshaw is in horrible condition, but it helped a lot of people. Some people loved the idea of being in a mansion, some grateful to [sic] being off the street, various situations [sic].”

“Ms. Wilkerson’s scam is made possible by the failure of city and county governments to address the lack of truly affordable housing,” commented civil and human rights attorney and founder of the Crenshaw Legal Clinic and Justice Warriors for Black Lives Nana Gyamfi. “Because they have made no effort to control rents and regulate landlords and allowed the displacement of thousands of people by developers and gentrifiers, vultures like Ms. Wilkerson are continuously swooping in and taking advantage of desperate people who are trying to keep from sleeping outside. All of the cities where Ms. Wilkerson has properties should be considered the proud sponsors of her exploitive enterprise.”