This year I was asked to help kickoff Compton’s Pride’s 2nd annual celebration as their keynote speaker. Here's my pride speech for 2021. 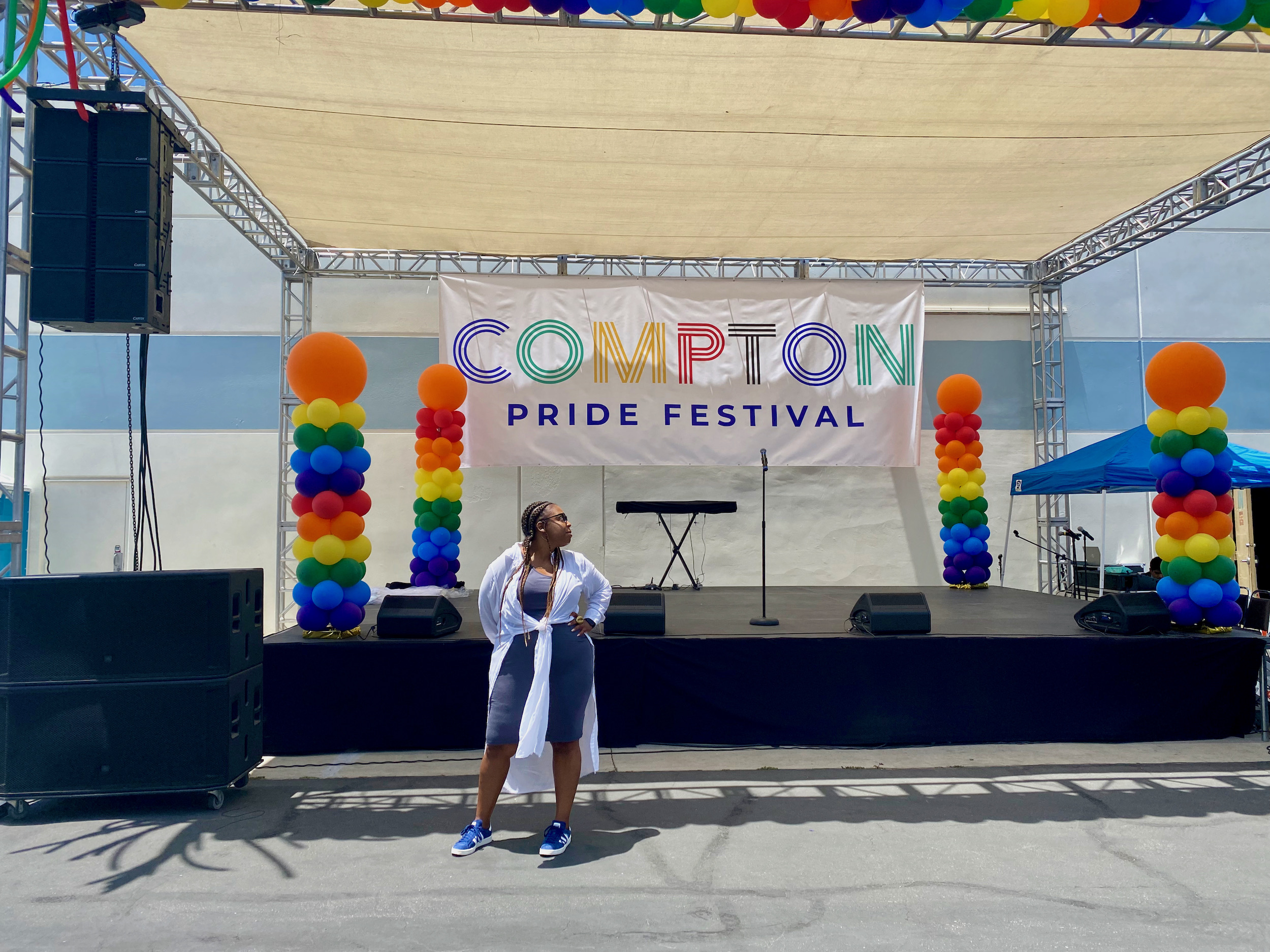 Every year I am asked to give a pride speech somewhere in this country. It’s both an honor and a task. It’s an honor because it’s great that people want to hear anything I have to say, lol. It’s a task because if you take your words seriously as I do, then you want to be intentional with the words you share and that means putting some serious thought into what to say.

This year I was asked to help kickoff Compton’s Pride’s 2nd annual celebration as their keynote speaker. The organizers held a hybrid event where the performers came out and performed live on a stage but the audience was online.  We’re almost out of the pandemic but not quite yet.

It was a great event and I was glad to have been a part of this year’s celebration.  Below is the short pride speech that I delivered.

I am honored to be here and to have been asked to set the tone for today’s pride celebration.

Compton has always been near and dear to my heart.

I started off life living in Hermosa Beach–which for anyone old enough to remember the 1980s– can imagine what being Black in a city like Hermosa Beach was like back then.

My parents divorced and my grandfather—who owned a lot of businesses in Compton and loved Compton community dearly–let my dad–his son–move into my great grandmother’s house Clymar and Alondra. She had just died and so the house was empty. So my sisters and I ended up splitting our time literally between two complete opposite worlds.

As a youth, I had a lot of problems.  I didn’t adjust well to my parents divorce.

One thing would lead to another and by 13 I was in the foster care system and would end up staying there until I emancipated out at the age of 17.  And if you think the foster care system is bad now, ask those of us who went through it in the 90s when Maclaren Hall was used as a dumping ground for kids with no placement and there were no transitional programs for when you aged out of the system–you were just on your own.

So I’ve been on my own since I was 17.  I didn’t get to go to my prom. I didn’t have a traditional high school experience because when I was in the system, I moved around a lot.  I wasn’t able to have the college education that I wanted because I had to work full time to take care of myself.

And even when I wanted to give up on this life, I didn’t. I kept on, worked hard and because people took a chance on me—all these years later I can stand here and tell you that I’ve traveled around the world, that I’ve been to China, Africa and Europe.  I’ve run major political campaigns, worked in our state’s legislature, in Congress and for at least five mayors, including my dear friend Compton’s outgoing mayor Aja Brown–and have been lucky enough to learn from and work alongside incredible leaders like Compton Councilwoman Michelle Chambers who is here today.

I have even been elected myself.

I write for major newspapers and magazines. I am constantly on television and radio.

And more recently I helped escort Ed Buck, who had two Black gay men die in his house of meth overdoses and who harmed even more young Black gay men–into the federal jail cell he currently occupies.

This little Black girl that started from nothing but a desire to survive and do good.

I am a lesbian. And to put even more respect on that–I am a Black lesbian.

I take as much pride in representing for Black women and Black lesbian women as I do in giving back to my community and staying involved.

Celebrate all of who you are 365 days of the year.

Do that.  Walk in your truth.

But with every step you take–remember that someone before you paved the road that you’re walking on.

You didn’t do that.  You just benefited from it.

The generations before you, before me–they did that.  They struggled, they fought so that you could be in Compton today out in the open for the second year in a row having a queer pride celebration.

Just like with Cesar Chavez, Martin Luther King, Malcolm X, Sojourner Truth and Dolores Huerta–it’s not enough to evoke the names of Marsha P. Stone, Bayard Rustin, James Baldwin, Audre Lorde, and all of the other queer Black and brown pioneers–you need to strive to be more like them and make your mark on history.

Like Princess Murray with Compton Pride–take as much pride getting involved in your community and giving back as you do in your clothes, your shoes, your hair–your photos on the Gram and your videos on Tik Tok.

I’m not up here to preach to you, but I am here to remind you that you are here because of the blood, sweat and tears of the many generations of Black and brown queer and trans men and women who came before you.

Each generation has a responsibility to leave this world better than they found it.

Find your role and get into it.  Make your mark.

Run for office. Fight for justice in the courtroom. Work to end the murders of Black and brown trans men and women. End LGBTQ+ youth homelessness. Teach. Heal. Entertain. Design.

There are no free rides.

Service is the rent we pay for the space we take up on this planet.

Give back and move us all forward. And I guarantee you that if you do–in the immortal words of the Compton philosopher Kendrick Lamar–we gone be alright.

That’s your charge and in time you will be giving generations yet to come the same directive as it was given to me by my elders.

The struggle continues and none of us are free until we’re all free.

Congratulations Princess Murray, Wilbur, Yvette, Star View,  and to everyone who worked to put this event together.