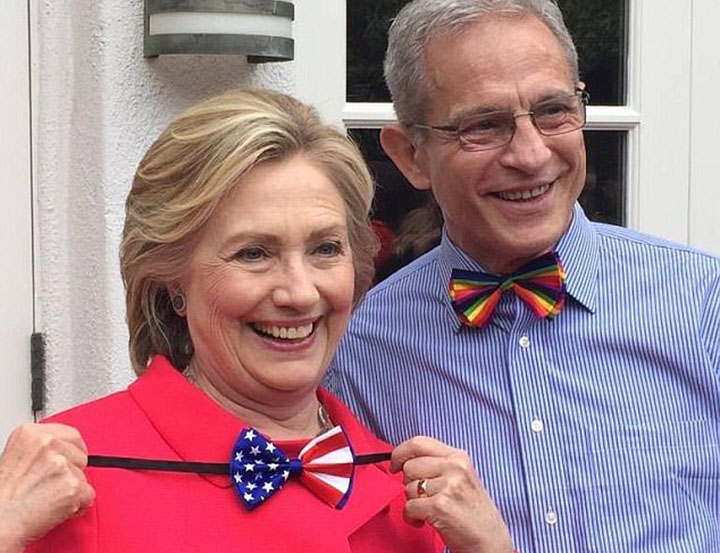 After the July 27, 2017 crystal meth overdose of 26-year-old Gemmel Moore in the West Hollywood home of prominent Democratic donor Ed Buck, Moore’s family along with activists in California have launched a petition calling on Democrats in five states to return over four hundred thousand dollars in campaign contributions from Buck. The petition, which in addition to returning campaign contributions to a fund set up to support Moore’s family and victims of Ed Buck, demands that Los Angeles County District Attorney Jackie Lacey avoid a conflict of interest and return her contribution from Buck and prosecute him to the fullest extent of the law.

“From those who denounce nearly anything for political expediency, the silence from our Democratic Party and the majority of our elected officials around Gemmel Moore’s death is profoundly disturbing,” said Kimberly Ellis, former candidate for California Democratic Party Chair. “Yes, this is about race, sex workers, drug use and power. And yes, it involves a well-connected Party donor. Remaining quiet only sends one message–Gemmel Moore’s life doesn’t matter.  Saying Black lives matter but not speaking out about this is political hypocrisy at its ugliest and demonstrates cowardice, not leadership.”

“I just want justice for my son,” commented LaTisha Nixon, mother of Gemmel Moore.  “Ed Buck’s attorney says that his client was a good friend of my son but I don’t believe that.  Good friends who can donate the amount of money he has at least call their good friend’s mother and offer condolences.  They call and ask how can they help.  Good friends contribute to their good friend’s funeral.  We raised money online to cover my son’s funeral from his friends and complete strangers who cared more than Ed Buck.  I just want justice for my son and all of Ed Buck’s victims.”

Gemmel Moore was a Black gay male who worked as an escort. His death, was immediately classified as an accidental methamphetamine overdose by the coroner, but now the Sheriff’s Department’s homicide bureau is taking a closer look after his personal journal was published. In addition, numerous young Black gay men have stepped forward making allegations against Buck recounting similar stories about a man who they say has a Tuskegee Experiment like fetish which includes shooting drugs into young Black men that he picks up off the street or via dating hookup websites. Buck has been accused of being a sexual predator, kidnapping, forced drug use, injecting unconscious Black gay men with crystal meth, filing false police reports to cover his crimes, coercion and pimping and pandering by his victims.

“As co-founder of Black Lives Matter I believe that all Black people should be fought for,” said Black Lives Matter co-founder Patrisse Cullors.  “Gemmel deserves to be alive. Any elected official who received monies from Ed Buck should not only return the money, but should challenge Ed Buck to come out and be accountable for the death of Gemmel.”

“Blood stained money is cursed money,” commented activist and Wear Your Voice Magazine Editor-in-Chief Ashlee Marie Preston.  “While many recipients may not have been aware of specifics around Ed Buck’s deadly experiments with disenfranchised black male youth, there has been an abundance of new evidence produced that confirms his racism, drug use and sexual exploitation of homeless young black men. To hang onto his contributions and avoid making a statement, establishes your allegiance to Ed Buck and sends the message that your values are in alignment with his. While we cannot bring Gemmel Moore back, we can turn this tragedy into triumph by using your returned contributions for legal fees in his family’s pursuit for justice.”

Buck has given hundreds of thousands of dollars of Democratic causes and candidates over the years. His Facebook page boasts dozens of photos of him with everyone from presidential candidate Hillary Clinton to Governor Jerry Brown, Los Angeles County Democratic Party and California Democratic Party chairman Eric Bauman and even Los Angeles Mayor Eric Garcetti.

In online ads soliciting young Black gay men, Buck has referred to them as being a “6-foot” n-word. On his Facebook page, he joked with friends using the n-word.

To date, Rep. Karen Bass (D-California) is the only elected official to return her entire donation from Ed Buck of $250 to Moore’s family. The local Stonewall Democratic Club has contributed as well as West Hollywood Councilmember John D’Amico who contributed $25 out of over $35,000 in donations he’s received from Buck.

“It’s troubling to see that so many Los Angeles-area Democrats who have taken donations from a man who has allegedly stalked and preyed on the most vulnerable of society have nothing to say,” said social critic and political commentator Jasmyne Cannick. “Just the fact that the allegations have been made and reported on in the news that these politicians are most influenced by should — and normally would be enough for Democrats to return their donations and issue statements distancing themselves from the accused. But for the most part, nothing. Is it because Ed Buck is white? Is it because he is white and gay? Is it because he often maxes out on contributing to their campaigns? Is it because the accusers are Black gay men? Is it because the accusers are Black?”

Elected officials and organizations in California, Nevada, Arizona, Indiana, Illinois and Washington D.C. that received money from Ed Buck are asked to return their contribution to the Justice 4 Gemmel + All of Ed Buck’s Victims Fund to help with legal costs as well as supporting the family of Gemmel Moore and all of Ed Buck’s victims.

Partial List of Recipients of Campaign Donations from Ed Buck