Naked and Bleeding: One Woman’s Story of What Happened When the Sheriff’s Came Through Her Front Door

It goes without saying that Jane Doe is a Black woman. 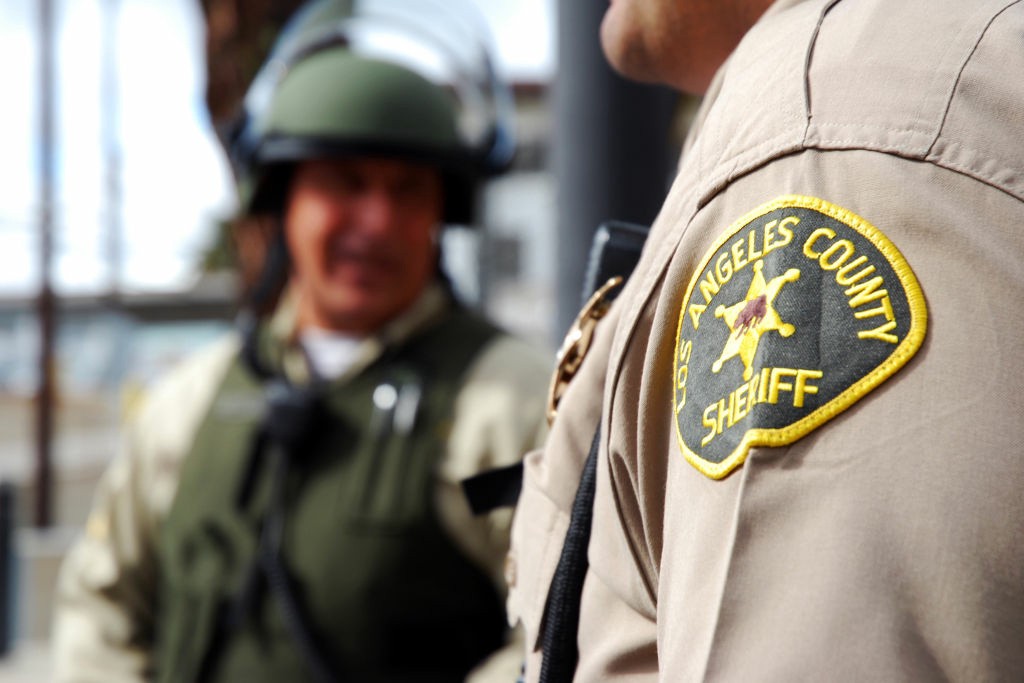 It’s been almost one year since deputies from the Los Angeles County Sheriff’s Lancaster station armed with rifles and shotguns kicked in “Jane Doe’s” door without warning, and dragged her outside naked and bleeding from her menstrual cycle. It goes without saying that Jane Doe is a Black woman.

24-year-old Jane Doe was home alone with her 5-year-old son and 13-year-old sister. She had just taken a shower when sheriff’s deputies without warning came barreling through her front door, tearing the door off the hinges. Guns in hand, the deputies ordered a naked Jane Doe — who was upstairs getting out of the shower and had run to the stairs to see what the commotion was — to come downstairs naked. Screaming and asking to see the warrant and be allowed to get dressed, she was forced at gunpoint to come downstairs naked in front of a group of male deputies.

“I had my phone recording the whole thing, and I scanned myself from head to toe with my phone’s camera to show that I was completely undressed and these officers are pointing guns at me and pointing guns at the children too,” Jane Doe explained. “The yelled at me to come downstairs, and I didn’t want to make the officers with the weapons nervous, so I went down the stairs, and once I went down the stairs, it just went left from there. They snatched me off the stairs and tried to take my phone out of my hand. I was able to throw my phone to my little sister before they had me in handcuffs.”

While her 13-year-old sister recorded the events, video shows deputies at one point threw a blanket over her head like she was an animal.

Jane Doe chokes back tears while painfully reliving what she says was the most humiliating day of her life. The deputies would go on to take her outside, where the blanket hiding her body would fall, leaving her nakedness exposed and blood dripping down her legs. She says that’s when deputies jumped on her and tied her up like chattel before throwing her in the back of a patrol car.

“They wrapped the blanket — the comforter — around me, but it wasn’t secure,” Jane Doe explains. “The officer was barely holding onto it. I could feel the wind coming up under me because I wasn’t dressed. I could just feel all air. By the time I got out the door, he opened my cover and released it so it could drop. When that dropped, I fell to the ground because I didn’t want all these police officers that was [sic] outside — it was a bunch of male police officers — to see me naked.”

Jane Doe says that her dropping to the ground was viewed as resisting by the deputies, so they flipped her over and forced onto her stomach. A group of deputies came and jumped on top of her, touching her breasts and private areas in the process. She says deputies also retaliated against her for telling her son and sister not to talk to them.

Jane Doe continued, “An officer had his hand on my head and pulled my hair. I had bald patches from where he pulled my hair out. Another officer used both of his knees on my neck and back — I ended up with two sprained wrists and ankles and my left shoulder was sprained. One officer said, ‘Aw shit’ and started giggling when his hands touched my private part and I was like ain’t no aw shit you know exactly what you’re doing. I kept telling the deputies I couldn’t breathe and one of the deputies yelled for someone to bring him the ties.”

The deputies ignored her pleas not to tie her up and dragged her naked across her front lawn to the patrol car.

Crying, Jane Doe recounts one of the deputies smiling and laughing at her naked body in the back of the patrol car.

“I turned around and looked at him and he was back there smiling like something was funny.”

She says that she thought she had suffered the ultimate humiliation but that it got worse.

“I was sitting in the back of the police car bleeding from my menstrual cycle,” she cries. “My aunt pulled up. The only way for me to identify to her that I was back there like that was to smear blood on the window to show her that I am back here undressed on my period.”

Initially, the deputies would not even let her aunt give her a tampon but wouldn’t let her use the bathroom to put it on telling her aunt that she might conceal evidence if allowed to do so.

“Fifteen minutes later, one officer comes to the car and turns the AC on, rolls down the window, and lets my aunt throw me a tampon. I had to put my tampon on in public in the back of the police car.”

After asking her where her clothes are, she recounts that deputies went into her house and brought out her clothes and left them on the trunk, refusing to give them to her. After putting her tampon on, a deputy uncuffed her and allowed her to put her clothes on.

To add insult to injury, Jane Doe was arrested and charged with three counts of resisting arrest.

She says a detective gave her an ultimatum at the Lancaster sheriff’s station — either sign a document agreeing that she was illegally recording the deputies in her house and that they can have a copy of the recording or get maced.

Weighing the consequences of being maced while being handcuffed, Jane Doe chose to sign the paperwork.

When she was given her phone back, most of the video she had captured at the beginning of the incident was missing. The video was edited to just capture deputies throwing the blanket over her head.

On top of that, she was never given a copy of the documents she was forced to sign under duress.

So what was the cause of the sheriff’s deputies coming to her home in the first place? The deputies claimed they were there to execute a warrant for Jane Doe’s brother’s arrest on an assault allegation. However, her brother was already in the sheriff’s custody some 50 miles away in South Los Angeles. And that assault charge? The Los Angeles County District Attorney’s Office declined to file criminal charges citing a lack of sufficient evidence. In the end it was all for naught and Jane Doe, who had no criminal record and was not the subject of the original warrant, was the only one charged with a crime.

Because of the incident, Jane Doe has been experiencing severe post-traumatic stress syndrome for which she is in therapy. I would be too. A year later and she still gets nervous when someone comes to the door, and she’s suspicious of unknown vehicles on her block. Her mother says she barely leaves the house anymore.

She says she built up the nerve to come forward after the hanging death of Robert Fuller turned the nation’s focus to the Antelope Valley. Black residents say there’s been a long unchecked and unreported on history of anti-blackness, racial tension, and racism and that the only people scarier than the white supremacists, Neo-Nazis, and skinheads that call the area home are the sheriff’s deputies on patrol.

I don’t need to tell you that America is experiencing an era where there’s a new video or a new headline of police violence against someone Black almost every day. It’s gotten to the point that it’s hard to keep up even for those of us who make it our business to follow these stories. It’s important to note that victims of police violence don’t always die — so their stories don’t always make the national news.

More often than not, they live and are left to go through life suffering extreme mental and physical pain, including anxiety, grief, shock, and humiliation for the rest of their lives, most never seeking or getting justice.

The good news is that Jane Doe will not be a part of the majority of people who experience police violence and live and never seek justice.

She’s currently represented by The Cochran Firm. She has filed a civil rights lawsuit against the County of Los Angeles, citing a violation of her civil rights, battery, negligence, and negligent infliction of emotional distress and intentional infliction of emotional distress. Interestingly enough, since filing her lawsuit, the three counts of resisting arrest have been dropped.

“If there is an unclothed suspect that is female, law enforcement nationwide is required to have a female officer present who is the officer who puts hands on that particular person,” said attorney Brian Dunn. “The fact that you had only male deputies handling my client, it demonstrates a further abrogation from the national standard of what it is that they’re supposed to do. The only way that they could bypass that rule and go around it is if they have some type of justification that would equate to an immediate defense of life situation or exigency that would require them to not take steps to ensure that a female officer was there. They had all the time in the world here. They just didn’t care enough to have a female deputy present, and that’s another problem that we have with their approach to this incident.”

The only phrase more infuriating from law enforcement than “I feared for my life,” is their standard canned response when refusing to discuss these types of incidents and instead choosing to hide behind “pending litigation.” But we know — even if there were no litigation pending — they still wouldn’t speak on it.

I don’t think there’s a woman alive in her right mind that’s going to willingly be dragged out of her home naked — let alone while she was on her menstrual cycle.

As a woman and a Black woman, this story infuriates me and again shows the callous disregard for which law enforcement has for Black women and our bodies. You cannot convince me that they would do this to a white woman — take her outside naked and let her bleed all over the place in front of a bunch of men. Never!

When Jane Doe’s story first aired on television, her now six-year-old son identified his mother immediately — even though her face was blurred.

“My son remembers that day. Even though’s he was five-year-old, he will never forget it. He told me, “Mama, I remember they pointed their guns at me, and I thought I was going to die.”