My Ode to Downtown L.A.

My one-year experiment of living in downtown Los Angeles has come to an end and I can’t wait to get TF out. 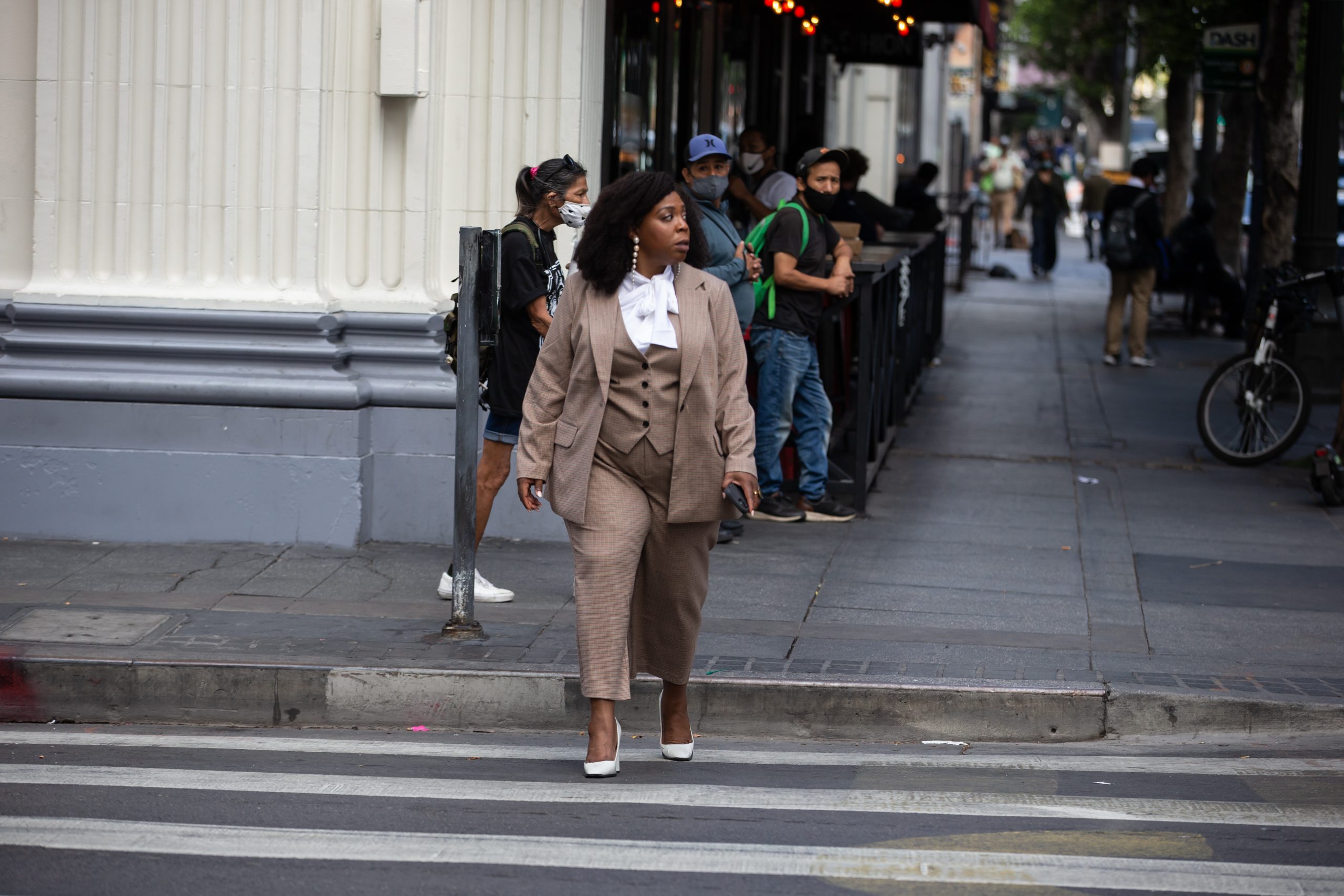 It’s my truth and I’m going to tell it.

My one-year experiment of living in downtown Los Angeles has come to an end and I can’t wait to get TF out.

It was supposed to be my great Sex(less) and the City year. I was checking off an item on my bucket list — live in downtown L.A. and enjoy the cosmopolitan loft life. You know, rent that’s too damn high for open spaces, high ceilings with exposed pipes, beams, and brick walls. Yeah fancy now. I was supposed to do more walking and less driving because I was in the center of downtown Los Angeles where everything was. Art, fashion, music — I even had a Starbucks across the street from me. A friggin’ Starbucks. I remember thinking this is so cool, Jasmyne. Looking back, I was so naive.

But as my experimental living year draws to a conclusion I can honestly say that I got more than I bargained for and the amount of therapy and self-care I am going to need to address the PTSD I will be leaving downtown with was not worth it.

To begin, I don’t ever want to see another meth or crack pipe or needle for heroin being used in my life. Not while I’m driving down the street, not when I am trying to park my car in the parking garage, not on the sidewalk in front of my building when I am leaving or coming home, not when I am on my morning walk/run where I try to walk but usually end up having to run from someone. Never ever.

It’s true, I was someone who advocated against throwing the book at people for minor drug crimes including drug use. Drug addiction is, after all, an illness. And before you clutch your pearls, I still believe that. I just also believe that it’s easy to advocate for something you don’t have to live around. When you have to see drugs sold in an open-air market, drugs used in front of kids and elders, and in some cases you literally have to run from people after they’ve taken a hit because they’re on one now, your whole entire perspective changes.

Did you know that downtown has an unmistakable smell that all of the Bath & Body candles and wallflowers in the world couldn’t hide?

I was told that the strong smells coming from the ever-present pools of urine — both dog and human and globs of feces, also both dog and human, would eventually become unnoticeable. That I would get used to it. That proved not to be true. It’s a year later and I still smell all the smells. I honestly don’t know what’s worse, the wafting smell of fresh feces on a hot day in a concrete jungle or seeing it smeared all over the walls and sidewalks as if it’s artwork and supposed to be there.

Moving on to dicks. Yes, dicks. I don’t want to see another one of those either. If there wasn’t one poking out as someone just stopped and urinated in public, there was one being fondled by some glossy-eyed-looking man or being waved around in my direction.

It wasn’t all bad though. After a year of getting around in downtown Los Angeles, having to maneuver between the mentally unstable and folks high off drugs, I can tell you that I am ready for the zombie apocalypse. I can duck, dodge, weave, run, kick, stomp, karate chop, and yes — if need be — punch with the best of them.

I will say that I learned a lot about myself in the past year. I learned that I am not self-absorbed enough to live in downtown Los Angeles. I can’t just ignore the piles of Black bodies laying on the sidewalk as I step over them to get to my destination. Try as I might, I couldn’t do it. In a word, the state of Black people in downtown is depressing. I don’t care how good a day you are having, once you step outside and see the world as it is down there, all of the good feelings go away — that is if you’re not too self-absorbed to notice.

And as someone who has had a front row seat for a year to our city’s unhoused crisis, let me be the first to tell you that there is no good coming from letting people wallow in their own — or other’s — urine and feces all day while begging for money and food on what I believe to truly be America’s filthiest sidewalk. It’s not dignifying and it’s really not helping them. If they were your relatives would you want that for them?

I did make great progress in controlling my temper and keeping my mouth shut. It wasn’t easy, but I did manage to bite my tongue and look the other way every time — okay most times — one of my many dog-owning neighbors took little Lassie out to crap and then just left the crap there on the sidewalk. Although, there was this one time my neighbor let her precious Cujo crap in the lobby of our building. She just watched her dog squat down and crap right in the middle of the lobby before trying to get on the elevator and leave it there. Notice I said tried.

In the past year, I’ve witnessed armed robberies, assaults, and people having sex in public. Nudity. Nudity is popular in downtown Los Angeles, as popular as openly smoking meth and crack or shooting heroin.

A bit of advice. Masks are good for more than just fending off COVID. If you get the right one, it can mitigate the smell of downtown Los Angeles as you walk outside. In addition to mace, pepper spray, a taser, and a gun if you’re lucky enough to get one of Willy Wonka’s golden concealed carry permits, invest in having your own personal fire extinguisher. If you don’t need it for one of your neighbors who fell asleep with a blunt in their mouth and almost burnt down your apartment building you will need it for all of the other fires that seem to happen sporadically on a daily basis in downtown Los Angeles.

True story. Once a guy with a devilish come hither look in his eyes chased me on his bike on my morning walk/run. This actually happened on Spring Street in front of LAPD headquarters. I believe that I was only saved from being raped in front of police headquarters because I managed to pull my phone out like I was dialing 911. He then took off in a different direction.

Oh did I mention that I have increased anxiety thanks to downtown’s noise pollution? From the neverending traffic, car and bus horns, blaring sirens all day and all night, and people screaming at the top of their lungs, I have become sensitive to noise in a way that I wasn’t before I moved downtown. Nobody make any sudden moves or loud sounds around me. It’s triggering.

Not that it matters to you but I stopped playing tennis in the mornings. Yeah, I realized that if I did manage to get over my fear of walking from my apartment building to the parking lot at 5:45 a.m. to be at the courts by 6:30 a.m., and wasn’t raped or robbed along the way, the daily rat convention taking place in the parking lot was more than I could handle. I was outnumbered.

Oh, happy day! In a few weeks, no more having to beat the sun home because just the short walk from my parking garage to my apartment building can be detrimental to my health. If I’m lucky enough not to be assaulted, robbed or raped in Joe’s (overpriced and under secured) Parking Lot o’ Horrors, I then have to carefully tiptoe past the zombies — without making any sudden movements or eye contact. Failure to do so means I have to run home.

Did I mention I had a great view from my 10th-floor loft? Yes, as long as I followed Earth, Wind, & Fire’s advice and kept my head towards the sky it was all good. Looking down is not recommended.

Living at the intersection of rape and murder for a year has sucked the soul out of me. It really has. I used to have a gleam in my eye, a pep in my step, and a smile on my face. Now all I have is this perpetual look of, you don’t want to fuck with me today. Not today.

So as I leave downtown behind all I can say is never again. Never fucking again.