Mitrice Richardson: The Anatomy of a Murder–And Cover Up

The latest twist in the death of Mitrice Richardson. 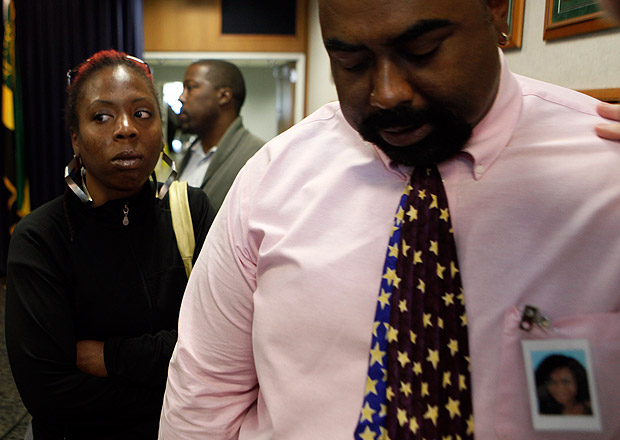 The latest twist in the death of Mitrice Richardson, the then 24-year-old who vanished seemingly without a trace in September of 2009 after being arrested and detained by Los Angeles County Sheriff’s deputies for non-payment of bill from Geoffrey’s Restaurant and less than an ounce of personal use marijuana—is that Assistant Chief Coroner Ed Winter says that sheriff’s deputies may have violated the law and undermined his investigation in August when they moved Mitrice’s remains.

Why am I not surprised?

It doesn’t take a rocket scientist to know that you never move the remains of a body until after a forensic team has gathered all of its evidence.  Thank you CSI and Law and Order.
Speaking to the Los Angeles Times, Winters said that he was “very clear” that the remains of Mitrice Richardson should not be removed when they were discovered in a Malibu canyon, and said he couldn’t recall a case where a police agency moved remains without coroner’s clearance.

When they first arrived at the scene found by state park rangers in the rugged ravine, sheriff’s officials thought only a skull and maybe a few other bones were there.

But leaves were brushed aside, and Richardson’s entire skeleton was revealed, at which point Winter said “I told detectives not to touch it.”

Winter said he was shocked to hear that minutes later the remains were headed back to a sheriff’s station, and said a state code that describes the authority of the coroner in handling dead bodies may have been violated.

I said it before, and I will say it again, someone is covering something up.  If you recall, it was Sheriff Lee Baca himself who said at a press conference announcing Mitrice had been found that the sheriff’s deputies retrieved her with the coroner’s office.  Hear it for yourself.

No one can tell me—and expect me to believe them–that Mitrice Richardson voluntarily ended up in the remote spot where her body was found.  She was hidden there with the hopes of her never being found.

I have always believed and quite frankly still do that someone from the sheriff’s department either murdered Mitrice or knows exactly who did.  I still believe this to be the case and the coroner’s report only makes that hunch stronger.

It was Sheriff Lee Baca himself who told me and Mitrice’s father Michael Richardson, in his Monterey Park office, that we may never know what happened to Mitrice and “and she may have succumbed to the elements of the Earth.”  Add to that sheriff’s spokesperson Steve Whitmore was all too quick to say that the body found last August in that Malibu ravine wasn’t Mitrice.  At the press conference that followed the announcement by Baca that it was in fact Mitrice, he said once again that we may never know what actually happened to Mitrice.

Coincidence?  No, I don’t think so.

To add injury to insult, Sheriff’s homicide Capt. Dave Smith said in a media report that “poor phone and radio reception” kept coroner instructions from reaching investigators at the scene, and because night was falling the bones could have been jeopardized if left in place.

“Our main concern was the animals were going to get to her remains that night,” he said.

It’s already been confirmed that Mitrice’s body had been there pretty much the entire time we were looking for her.  Meaning that whoever killed and dumped her body, did so within 48 hours of her initial disappearance.  So if Yogi Bear and Boo and Sylvester the Cat hadn’t eaten what was left of her in the past year, why then on this specific day would they be looking to eat her?

I can figure out that much out and I’m not even a sheriff’s deputy—imagine that.

Capt. Smith also said that the scent stirred up from his team and the remains made the situation potentially dangerous, and the law allows for deputies to move remains in such situations.

The only scent stirred up from Smith and his team was the scent of a cover-up and that my friends smells a lot like bullshit.  Plain and simple.

Deputies could not lead coroner’s investigators to the scene the next day, and it was about two weeks before another ravine search turned up more bones.

And in the end, like Sheriff Lee Baca predicted when he told Michael Richardson and me in December 2009, no cause of death could be found after an autopsy.

The icing on the cake–the county’s Office of Independent Review still to this day maintains that deputies followed policy and acted properly.

Mitrice Richardson was murdered.  Someone or someones are trying to cover it up and has been doing so from the day she disappeared.

I mean–who gets arrested for not paying a bill at a restaurant and less than an ounce of personal use marijuana only to be released in the dead of the night without a car, purse, or cellphone?

Even those who do not normally subscribe to conspiracy theories have to admit that something just ain’t right with any of this.

The question you need to be asking yourself is does the Office of Independent Review’s Michael Genacco still believe that deputies followed policy and acted properly, just how guilty is Sheriff Lee Baca in all of this, and given this most recent revelation, how much more is it going to take before someone from the Los Angeles County Board of Supervisors or the U.S. Attorney General’s office does something meaningful–not symbolic or to pacify the people for the moment.  I’m just saying.