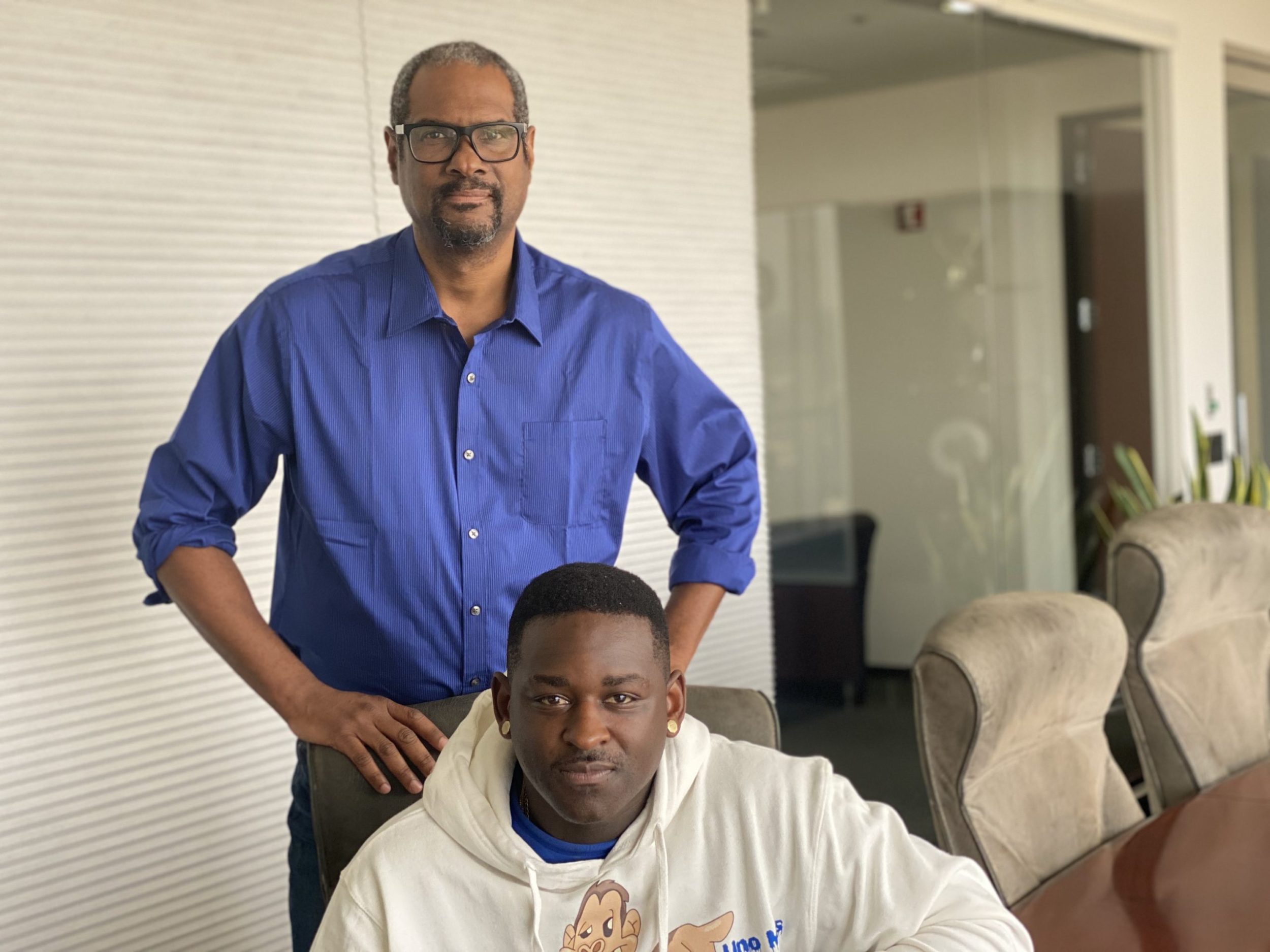 Thirty-three year-old Compton native Darnell Hicks had no idea why his phone was blowing up Sunday night.  Like every Sunday, he was working the swing shift as a client aide at a South Central transitional housing program when all of a sudden he started receiving back to back text messages and social media notifications.  Darnell could hardly believe what he was reading–that he was wanted in the shooting of two Los Angeles County sheriff’s deputies as they sat in a patrol SUV at the Compton Willowbrook rail station.

“I was shocked and worried,” said Darnell Hicks.  “So I hurried up and Googled the number to the Compton Sheriff’s Station and called in.  I told them that there are social media posts saying that I was wanted for shooting the two sheriff’s deputies. I wanted to know if it was true.”
He said the watch commander told him he’d call him back.
Two hours later he received a call back asking if the watch commander could come to his job.

“They said they wouldn’t come with a lot of sheriffs–that it would just be two people,” explained Hicks.

By the time they came to his job, Darnell was receiving death threats on social media and his home address had been published online by a right-wing extremist Twitter influencer named Ian Miles Cheong.
“It was crazy because I live with my parents and my grandmother.”
Darnell’s mother was a nervous wreck.

“He called and asked me if I had looked on Facebook and I said no,” explained Pamela Clayton-Hicks, Darnell’s mother.  “They had his face all on there on social media talking about he was the one that shot the two cops.  And I just got my husband and told him come on let’s go down to the sheriff’s station and see what’s going on before anything get out of control. We all live at the same house together with my 93-year-old mother and I take care of my mentally ill brother and the sheriff’s could have come in there and shot everybody in my mother’s house not knowing who they were really looking for.”

Darnell said he hadn’t been anywhere near the Compton Blue Line station on Saturday.  Like most Saturday nights he was out dirt biking with his friends through Compton and Watts.
When the sheriffs finally arrived at his job, Darnell said they apologized for the situation.

“The first thing the sheriff’s deputy said to me when he got out of the car was, ‘You’re a lot taller than our suspect.”

Standing at 6 feet, Darnell’s dark skin was the only other characteristic that matched the suspect wanted.

Initially the sheriff’s department said they were looking for a “dark skinned male.”  They later clarified their description by saying “Black male.”
After getting home from work, Darnell said he was too worried too sleep.  The social media chatter hadn’t died down and he was still receiving threats and calls from friends.

“I probably didn’t fall asleep until 7:30 in the morning on Monday.”

After speaking with his former basketball coach from Double Rock Baptist Church whom he still kept in touch with, Darnell reached out to the Cochran Firm for legal advice and direction on how to clear his name and hopefully save his reputation.

Renard Smith, a Compton resident and Darnell’s former coach said, “I was shocked because out of all the youth basketball players I’ve coached in Compton, Darnell was not a kid involved with guns, drugs or gangs. When I initially spoke to him about this after seeing it on social media his response was very casual. I knew then he didn’t fully understand the seriousness of this issue.  As a Black man I also realized that this could be something recurring since the sheriff’s have been known to show signs of aggression and retaliation towards residents.”

The father of two daughters, Darnell added, “I have a lot I’m working on.   I coach football. I’m a rapper and I have my own clothing line Uno Mas. I am also a photographer, I sell hair and I do taco catering.  I do it all.  I try to stay busy.”
“He has no connection whatsoever,” said Brian Dunn, Managing Partner of The Cochran Firm.  “Any person would suffer greatly when falsely accused of a crime and especially a crime as heinous as this.  He simply has been thrown into this but for nothing other than the color of his skin.  There has been a complete blackout in terms of the information coming out.  No one has taken responsibility for it.”
It appears that the social media post identifying Darnell Hicks as the shooter came from someone named Floyd Bradford and the Lakewood CA. Regional Crime Awareness, Prevention & Safety Group, which boasts over 18k members on Facebook.
Compton Mayor Aja Brown said, “Unfortunately, the available description offered of the suspect is limited and many people fit this profile. I strongly urge dark-skinned Black male residents of Compton to be cautious during this time.”

Mrs. Clayton-Hicks continued, “I have three sons and my sons were never out there doing things like that.  They always did something positive and I love all six of mine and I don’t want no harm to come to mine.”

She said since her son’s story is coming out in the news she is more at ease.
“I watch everything moving,” she said.  “Anything moving I am always watching.”

Attorney Brian Dunn plans to request that the Sheriff’s Department’s Civilian Oversight Commission open an investigation to see if the misidentification of Darnell Hunt originated with the sheriff’s.

“I just want to send my prayers to the two deputies that were injured in this incident,” said Hicks.  “I want them to know that I’m innocent and it doesn’t have nothing to do with me.  For every other Black man out there, be aware because the description was a Black male so it can happen to anybody.”

As of Sentinel press time no suspects have been identified. The sheriff’s department issued a statement early Monday saying the information circulating online about Darnell Hicks “is ERRONEOUS information and there are no named or wanted suspects at this time.”