The mandatory online training for all employees displayed a photo former President Barack Obama on a slide describing sociopathic traits. 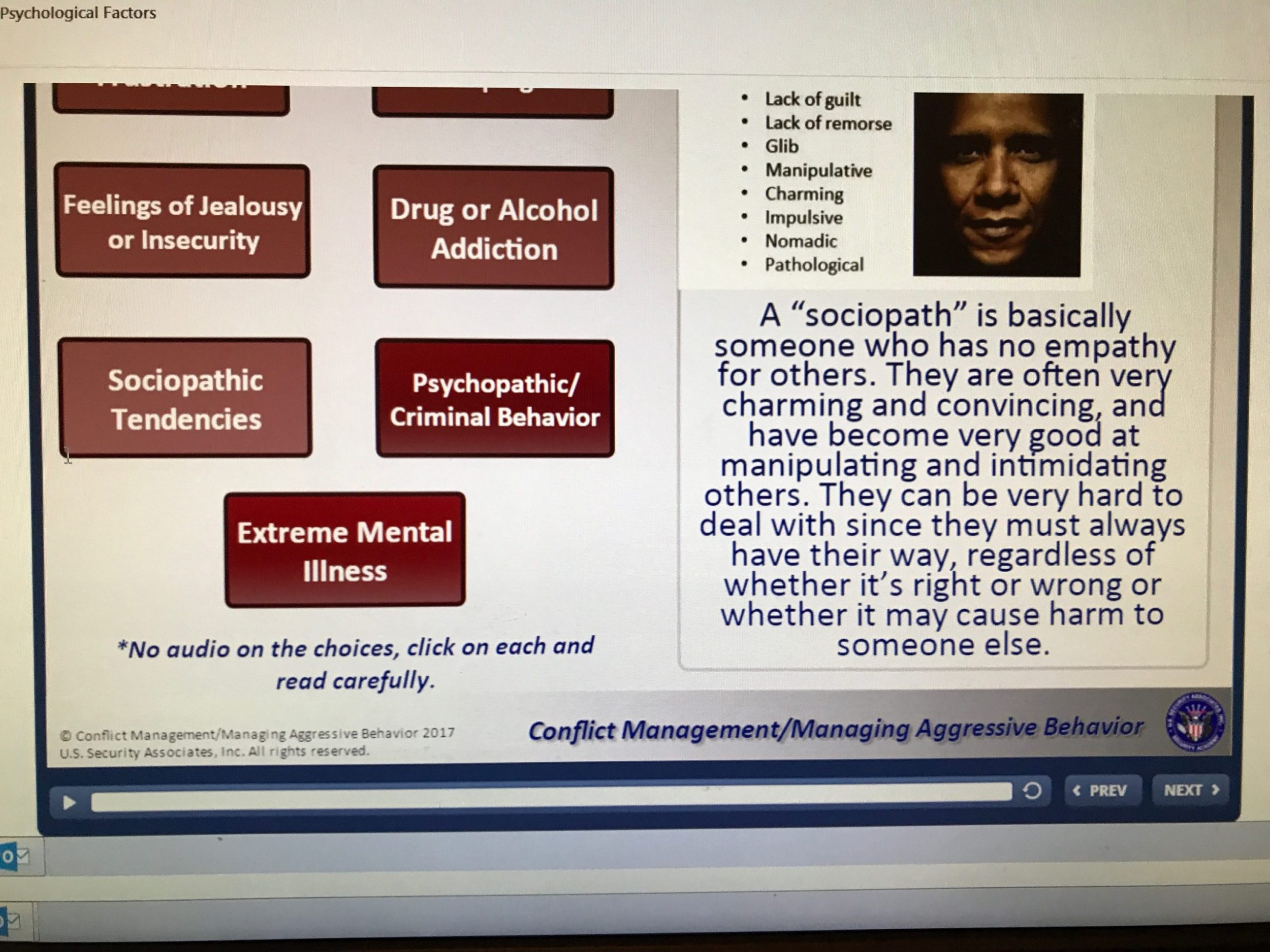 An officer with U.S. Security Associates, a major US government contractor that provides national security services and is responsible for guarding federal government facilities, sent out an email calling attention to the company’s use of former President Barack Obama’s photo during a recent training on sociopaths.

On August 31, 2017, Officer Madonna Butcher sent an email to U.S. Security Associates internal management, supervisors and all employees lambasting the use of President Obama’s photo during a Conflict Management Training on “sociopaths.”

While going through the Conflict Management Training session, I came to this page and was beyond offended. I am that this was a huge mistake that will be corrected!

As I continue, please note, although I am the one writing this email, I’m not the only one to be offended, I’m just the only one speaking up!

“Sociopaths” come in many shapes, genders and backgrounds, so to choose a picture of our former President, who happens to be an African American male, was very disturbing, disgusting and appalling!  Not only was the session repulsive, it was tone deaf of a company with so many people of color in its employ.”

The online training, which is mandatory for all employees, displayed a photo of the former President on a slide describing sociopathic traits, including:

The slide also described “sociopaths” as being, “Basically someone who has no empathy for others. They are often very charming and convincing, and have become very good at manipulating and intimidating others.  They can be very hard to deal with since they must always have their way, regardless of whether it’s right or wrong or whether it may cause harm to someone else.”

U.S. Security Associates is the parent company of Andrews International Security, which provides professional training for the security and law enforcement professionals and lists Sony Picture Studios as a client.  In 2014, then Sony Pictures chairperson Amy Pascal and film producer Scott Rudin faced racism allegations after emails were published discussing an event hosted by DreamWorks Animation head and major Democratic donor Jeffrey Katzenberg that was attended by Barack Obama.

According to Buzzfeed, Pascal emailed Rudin for advice on what to ask the President.

“What should I ask the president at this stupid Jeffrey breakfast?” she wrote in an email.

“Would he like to finance some movies?” replied Rudin.

Rudin responded: “12 YEARS.” Pascal then listed other films that Obama might like, according to whether or not they were directed by someone black or whether they featured black actors.

“Or the butler. Or think like a man? [sic]” wrote Pascal.

U.S. Security Associates boasts clients including “more than a dozen prominent film and television studios, numerous awards program producers, and key notables within the industry.”  According to their website, they provide security for entertainment industry clients such as the AFI Awards, the Daytime Emmys, American Idol, Latin Emmys, ESPY Awards, and the BET Awards.

I’m told by employees that Andrews International Security just added the NFL as one its clients.