In the words of Lauryn Hill: Babygirl, respect is just a minimum. 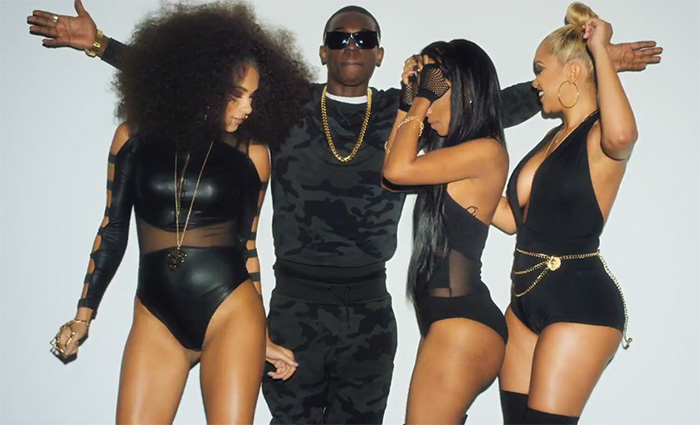 When we talk about the sexual harassment of women in America–it’s a short leap from “bitch” and “ho” to “Me Too.”

While it’s no secret that the film industry has an undeniable problem with complicity when it comes to the sexual harassment and abuse of women–less talked about is the music industry’s complicity and role in adding to the stories of Me Too.

I love hip hop–so this isn’t an assault on hip hop.  But as a self respecting Black conscious woman in America, there’s very little of what is being peddled today as hip hop that I can listen to guilt free.

Currently, almost all of the songs on Billboard’s Hot Rap Songs chart including “Rockstar” by Post Malone, Lil Pump’s “Gucci Gang,” Yo Gotti and Nicki Minaj’s “Rake It Up,” Migos’ “Motorsport” and even Cardi B’s “Bodak Yellow” all refer to women as “bitches” or “hoes” in their lyrics.

Billboard compiles their charts by counting radio airplay, digital download sales, streaming data and YouTube views of rap songs.  And let me tell you, men aren’t the only ones buying and listening to rap music in America.

As women of color we can’t rally for women’s empowerment and the right of women to live lives free of sexual harassment and abuse and jump in our cars and turn on songs with lyrics that assault our very being.

Without Black women, I doubt that R. Kelly and Chris Brown’s “Heartbreak On A Full Moon” would be number one Billboard’s Top R&B/Hip-Hop Albums chart.

And even though rapper XXXTentacion is about to go to trial on multiple charges of domestic violence after his ex-girlfriend alleges that he strangled her and beat her for cheating on him while she was pregnant with his child–that didn’t stop Capitol Music Group from signing him for $6 million while his songs continue to climb the charts.

Let me put this into another perspective for you.

With the very real possibility of white women boycotting any film produced by the Weinstein Co. and concern that Harvey Weinstein might make a profit from any deals cut to save the company from bankruptcy, several investment groups are refusing to come to the studio’s rescue.

On the other hand, you have music industry executives chomping at the bit to sign deals with rappers (even those awaiting trial on domestic violence) whose sexist and misogynist laden lyrics add to America’s rape culture.  Why? Because they know that even in this new wave of women’s empowerment, they’ll make ten times the money spent in profits.  Unlike white women, Black women will either look the other way or like in the case of R. Kelly–blame the victims.

In 2017, it cannot be socially acceptable to complain about racism freely and point out the sexual misconduct in the film industry but not to criticize a rapper’s sexism and misogyny simply because it’s “art” and we like the song.

Just like comedian Wanda Sykes correctly pointed out that actor Kevin Spacey doesn’t get to “hide under the rainbow” after coming out as gay in the face of charges that he seduced a minor–rappers with lyrics that refer to women as “bitches” and “hoes” shouldn’t get to hide behind the title of artist and creative expression.

From the rappers themselves to the music industry executives, sadly, today hip hop is an artform that is making billions of dollars off of degrading, humiliating, abusing, harassing and championing sexual violence against women.

As women of color we have to stop admiring and supporting these artists and then pleading ignorance to what they’re saying or making excuses for them because those are the same songs that make up the soundtrack to us not being able to walk to the park without getting catcalled by some man driving by, or you being called a bitch because you don’t respond to some man’s unsolicited advances. Or some stranger pulling up to me in public with impunity and freely commenting on my ass or some other part of my body–because in communities of color that behavior is an accepted societal norm.

Just like you can’t raise a healthy child smoking cigarettes around them everyday, parents, you can’t raise young sons into men who respect women and young girls into self respecting women when they’re watching you sing along and shake your ass to songs with lyrics that are telling them the opposite.

In the words of Lauryn Hill: Babygirl, respect is just a minimum.