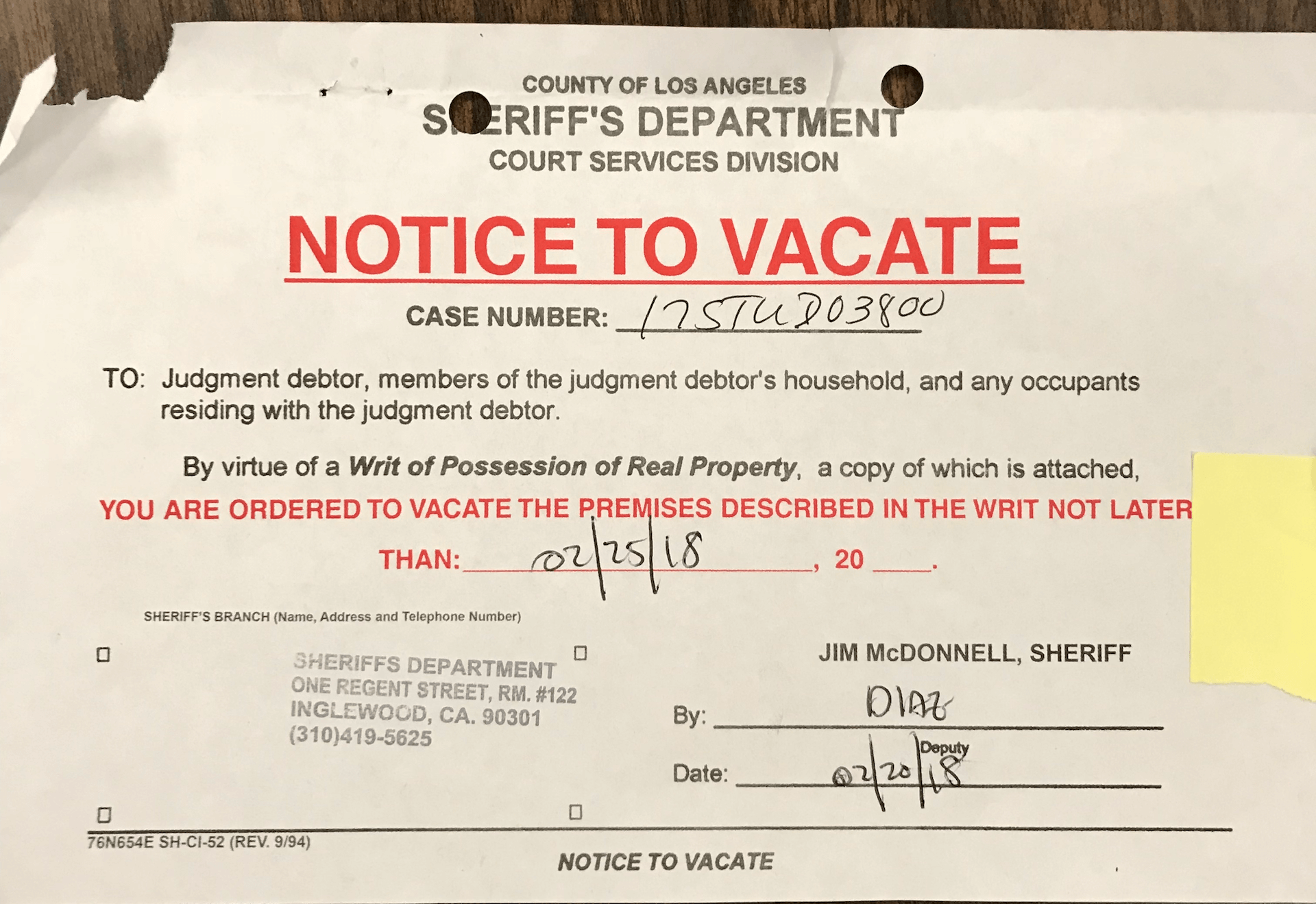 Tenants fighting eviction in South Los Angeles after a ‘transitional property manager’ they rented rooms from abandoned the property, say that Thursday morning at 8:30 a.m. landlord Izydor Wiltchfort illegal entered the house demanding to know who was showing up in court Friday while taking photos of the tenants and their living situations.

Tenants say they were caught off guard and felt intimidated by Wiltchfort and his attorney when they banged on their room doors Thursday morning demanding access, taking photos and to know if the tenants were planning on showing up in court Friday.

When the tenants called their attorney from the Eviction Defense Network to report the landlord’s actions, they were asked if they were willing to pay an additional $250 for the phone call.

Wiltchfort, who owns the property that is in the city of Los Angeles but borders Inglewood, had a rental agreement with Giovanna Wilkerson who skipped out on paying the rent and then abandoned the property and the tenants who were renting from her.

Last week Wiltchfort through his attorney William Abb made two offers to the tenants.

An about-face from the $50,000 (to be split evenly by the nearly one dozen tenants) offered just a few days prior that was still under consideration and a far cry from the $8,050 to $20,050 per tenant the landlord could be on the hook for according to a letter from the Rent Stabilization Division of Los Angeles’ Housing + Community Investment Department (HCIDLA).

Both offers from the landlord came with the stipulation that the tenants must waive their right to sue him in the future.

The tenants are due in Los Angeles Superior Court on Friday.

Court documents show that Wilkerson has had seven unlawful detainers filed against since 2009–the latest one being filed by Wiltchfort for the property on Crenshaw Blvd.

She currently runs at least three other transitional property houses in South Los Angeles. At one location she is housing nearly 40 people in two 5-bedroom apartments where the living room has also been divided up with curtains and rented out.

Several landlords have detailed how Wilkerson ran her business in their homes and then skipped out on paying the rent.

During a 2017 texting conversation, Wilkerson was trying to rent a house in South Los Angeles and said, “I’ve opened up 9 others homes while waiting on u [sic].”

The text was a part of Wilkerson was trying to convince a family to rent their property to her and they replied they were not interested in her “hustle.”

The family says she was super aggressive with them, reaching out regularly for approximately the past five years trying to rent their properties for her business.

Targeting low-income people, Giovanna Wilkerson, solicited the rental of rooms on Craigslist, through posted flyers and word of mouth claiming to operate transitional housing. Wilkerson targeted people in need of immediate housing who were mostly on government assistance (G.R., SSI, etc.). She took their money and occasionally food stamps as payment for rent.

Current and previous tenants say that in order to rent a shared room from Wilkerson demanded access to their debit card numbers, pin codes–including for their Electronic Benefit Transfer or EBT which is used in California is to issue food stamp and cash benefits to recipients. Tenants say she solicited them online, in front of the Department of Public Social Services and on Skid Row at homeless shelters including the Downtown Women’s Center.

According to Wilkerson’s current and previous tenants, residents receiving General Relief pay between $175 to $200 of their $221 monthly benefits for a bed bug infested mattress on the floor or bunk bed in a shared room. They say the accommodations for those who receive more money isn’t any better–they’re just charged more for it. Former comedian and stroke victim Vincent Cook pays $350 to sleep on the floor. Others pay as much as $1,000.

And while it may sound like a good deal to avoid being unsheltered, the house that recently served as home to as many as 40 men and women has only one working toilet and shower out of 4 full bathrooms. Water constantly leaks downstairs into the living room and every room in the house has signs (and smells) of mold in addition to the broken windows, rats, roaches, bed bugs and stray cats.

A 19-page city inspection report dated Feb. 20, from the HCIDLA shows dozens of violations were found at the house on Crenshaw. Among the citations were the use of an enclosed porch as a bedroom, broken windows, plumbing blockage, termites and dry rot, broken or missing electrical switches, loose guardrails, hazardous, unapproved, defected or improperly installed receptacle outlets, missing smoke detectors, defective or missing room heating appliances, unapproved plumbing, and dampness in rooms.

Frustrated residents told Nicholas that they filed complaints with several city departments regarding the condition of the house including with the City of Los Angeles’ Department of Building and Safety.

Nicholas told the tenants that his office couldn’t do anything while there was an open case with Building and Safety. He said it’s like the ‘fire department and police department’ in that they have nothing to do with each other.

“Building and Safety already had an open substandard notice that was written in September,” he explained. “What happened with that, I don’t know. When Mr. Mohammad called us in January, I knew that–you know–Building and Safety still had that order. Then when he [Mr. Mohammad] told me that it had ran out, that’s when I came and did the inspection September–no February 9th. He called me on–I think he put a complaint in on January 31.”

The residents still had questions and concerns about why it took so long for the city to act.

As of now, the residents are waiting to see if they qualify for relocation assistance through the City of Los Angeles. Two men Nicholas said were from the department that makes that decision arrived at the house along with him, but never bothered to identify themselves or speak to the residents and left after a quick walkthrough.

When asked about relocation assistance, Nicholas told the residents, “I wouldn’t be able to speak on it, that’s not my expertise.”

Nicholas did confirm that if the tenants left the property on their own or via an eviction lockout–they would no longer be eligible for relocation assistance.

A Notice of Abatement for Substandard Property dated Feb. 20 sent to the owner of the house says that all of the code violations need to be fixed by Apr. 13 and that HCIDLA will be back to inspect the property on Apr. 16.

Still facing eviction, the tenants of the Crenshaw house have established a Go Fund Me campaign to assist in paying their legal fees and to split what’s leftover among themselves to aid in their relocation.