EXCLUSIVE: “I risked my life to assist taking drugs off of Skid Row and have not been paid.” -- John Doe 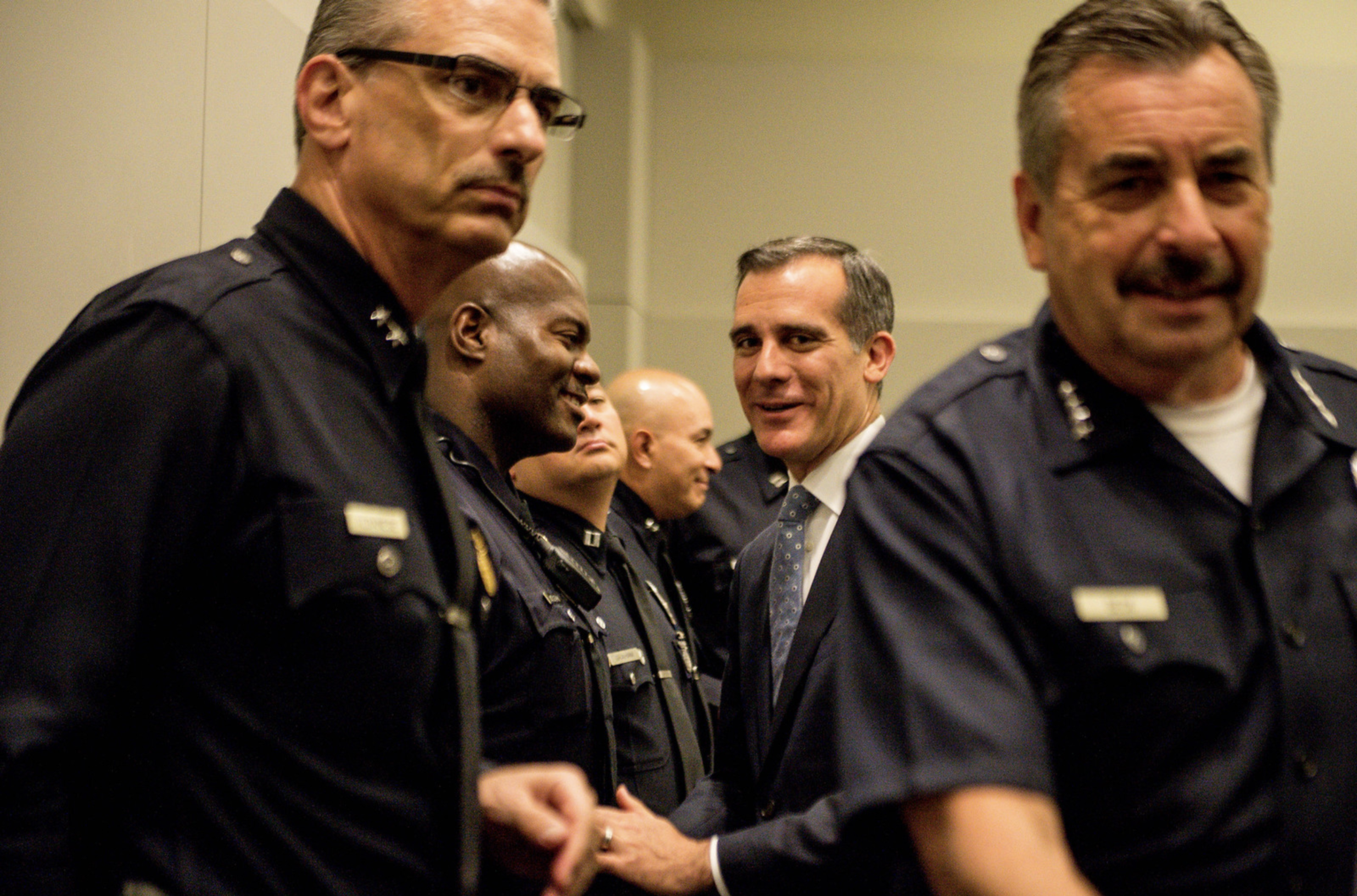 Chief of Police Charlie Beck and Mayor Eric Garcetti discuss the break up of a drug dealing organization that targeted residents on skid row on Thursday, April 28, 2016 at LAPD Headquarters. (Photo by Sarah Reingewirtz/Pasadena Star-News)

This story has been updated.

The April 26, 2016, Los Angeles Police Department bust of a Skid Row drug kingpin made international news.  Now, the informant who made it all happen says he still hasn’t been paid by the LAPD and he’s about to file a claim against the City of Los Angeles–the first step towards filing a lawsuit.

The early morning Drug Enforcement Agency (DEA) and LAPD joint raid in Cerritos netted a reported $1.8 million in cash, including $600,000 in one-dollar bills, five firearms, 22 pounds of methamphetamine, 13 pounds of cocaine, 20 pounds of heroin, and 19 arrests.

It’s the stuff movies and television shows are made of–complete with a television news crew that just happened to be there to catch it all on video.

The following day, Mayor Eric Garcetti and L.A. Police Chief Charlie Beck were all smiles for the media as they showed off photographs of what was seized, including stacks of cash and bags of heroin and cocaine.  When it was all said and done, Derrick Turner, 49, who police say was a top player in a Skid Row drug-dealing operation that preyed on the homeless, was sentenced to 11 years in prison along with several others.

And while both Garcetti and Beck would have you to believe that the bust was the result of something they did–the man who brought the drug ring to the attention of the LAPD and who actually put his life on the line in order for the LAPD to make the bust, wants you to know the LAPD is refusing to pay him the $180,000–or 10 percent of the cash recovery plus the amount of money for the drug and weapon seizures–that he’s entitled to.

“Not only Garcetti–but a few high ranking officials were there and they know that I’m the one who started that case in the beginning and I feel like I’ve been discredited and not paid for something that I did and I’m the one from the start,” explained John Doe.  “Everyone says the same thing. Every detective–they’re even uncomfortable to see that I never got paid.”

According to a recording of an Internal Affairs interview that took place at 201 N. Figueroa Street in downtown Los Angeles on April 13, 2017, with LAPD Detectives Richard Flores and Charles Schlund, the man who simply wants to be known as “John Doe” explained via his attorney that he came to the LAPD with information regarding the Skid Row drug ring.

“Mr. Doe brought some important transactions to the attention of his control agents,” the attorney explains.  “Arrests were made. In connection with some of the arrests and multiple encounters–if we may say–that Mr. Doe presented and assisted as an undercover operative with the LAPD, he was injured and he was hospitalized and he was made part of a arrest report.”

John Doe, 56, says that as a part of the sting, he attempted to buy $40 worth of dope from a man who tried to sell him fake dope.  Doe realized the dope was fake and started to walk away when the man sucker punched him.

The interview continues with John Doe’s attorney detailing the bust as being “highly publicized.”

“Drugs were seized, weapons were seized, and approximately $1.8 million was seized.  After the recovery of the 1.8 million, Mr. Doe communicated with his control agents B——— and M——— and there were multiple emails–or rather texts–conversations put together and there was a confirmation that Mr. Doe brought the transaction and the bust to the LAPD and therefore confirmed his entitlement to ten percent of the 1.8 million which would be $180,000.  As that moved up the ladder it hit an interim captain and then there was a changeover to a captain and he was told approximately on January 31, 2017, that he would not be paid.”

The attorney also says there’s approximately another $30,000 owed on the drug and weapon seizures.

On the audio recording Mr. Doe chimes in to correct his attorney on the location where he was given this information as being the Los Angeles Police Academy Elysian Park complex and not the Training Division in Westchester.

The attorney then continues, “He basically delivered the services for the LAPD in connection with assisting and facilitating the bust.  The arrests were made. The drugs were seized. The guns were seized. The cash was seized and he has tried every effort since the bust at that time to now to obtain payment and has been unsuccessful and we were actually suggested by not only the control agents M——— but the FBI who has followed the case. They also said you may want to go directly to Internal Affairs because recovery was made and LAPD is basically the accused for not paying my client his $180,000.”

The interview also details how John Doe’s control agents, who at the time were assigned to Wilshire Division and the Narcotics Abatement Unit (NAU) in Central Division–agree that Doe is owed the money by the LAPD as per his standard operating agreement.  The attorney and John Doe say the hang up in payment for services rendered seem to have started with Gang and Narcotics Division Captain Stephen Carmona but might have even reached the upper echelons of LAPD’s headquarters otherwise known as the 10th floor.

John Doe says that the LAPD usually pays him “cash money” and that this is the first time in 20 years of working with the department that he hasn’t been paid for a job.

“They buy and bust–they pay right there,” says Doe.  “Those minor cases, they pay right there. When it’s a big case, it takes time.  And when I say time, it can take years. Not only LAPD, but even the federal agencies take two or three years to get paid.  When the case comes down it’s a headache. It’s a headache to get paid until the people get sentenced, I don’t get paid.”

Doe says that his work with the LAPD and other agencies is work that based on mutual trust and understanding.

Doe says that with the LAPD, his agreement has always been verbal.

Even though John Doe has aided law enforcement in taking down drug dealers and gangs for over 20 years, it wasn’t enough to earn him permanent residency in America.  He didn’t become a permanent resident until 2017 and it came with no help from any of the agencies he works with.

Doe says that he faced deportation and was denied a Green Card four times–once because the U.S. Government thought he was a drug trafficker.

When talking about his citizenship status, Doe chuckles.

“Me, a drug trafficker?  I showed the letter to my handlers and we all laughed.”

“Mr. Doe is an undercover operative,” he explains.

An undercover operative is someone who is paid and who is an insider receiving cash for information.  Operatives never had any previous association with the groups or persons they are infiltrating.  Operatives gain knowledge of pending illegal acts and are able to stop said acts from taking place and rarely testify in open court.

A consummate professional with the utmost respect for the work that law enforcement does in combating the drug and gang epidemic in Southern California, John Doe says that he still continues to work with the LAPD on other cases while pursuing his payment on the Skid Row Bust.

Once again John Doe watched on television as others took credit for his work, his connections and his leads that led to the bust.  The only difference is that he was paid for that job.

John Doe says that just like the police he assists–he risks his life every day in the streets bringing cases to them and deserves to be paid.

“I’m not working off a beef,” Doe explains.  “I’m not on probation or parole. This is just what I do.  It’s my job and I’m good at it. It’s how I take care of my family.  When the LAPD refuses to pay me the money I rightfully earned they are literally taking food out of my mouth and those I take care of. Chief Beck took all the credit for my work.  He should pay me what I am owed.”

A February 21, 2018 letter from Chief Beck and Detective Bureau Deputy Chief Justin Eisenberg says that Doe’s claims have been classified as “Unfounded” leaving him no other recourse except to take legal action.

When asked if he was worried that the LAPD command staff might expose his identity in retaliation for coming forward and filing a claim against the city Doe said,  “This is about payment.  I risked my life to assist in taking drugs off of Skid Row and have not been paid.  That’s not right.  That’s not right at all.”

6:10 p.m.: This story was updated to reflect John Doe filed his claim for damages.

5:10 p.m.: This story was updated with additional information on the difference between a criminal informant and undercover operative and with an additional quote from Mr. Doe’s attorney.