Family says that Najee Ali did not have permission to launch a GoFundMe for the man’s funeral. 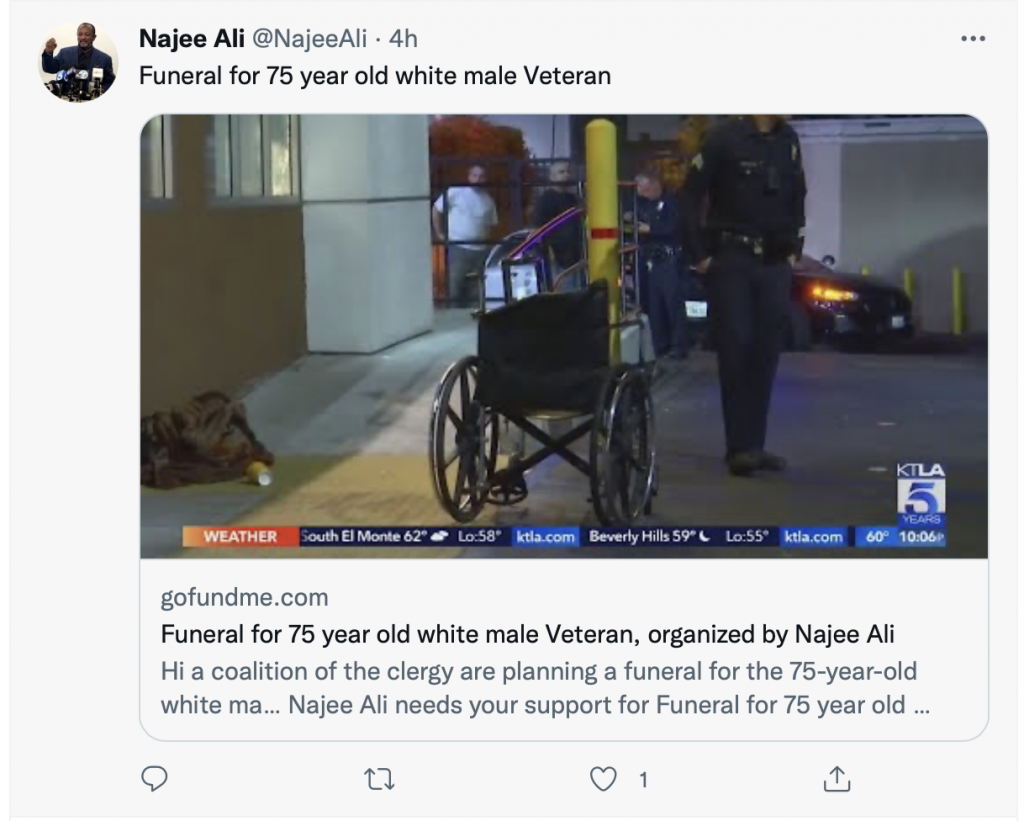 The family of a homeless man and double amputee shot outside a McDonald’s in South LA’s Westmont neighborhood who died says that Najee Ali did not have permission to launch a GoFundMe for the man’s funeral.

A family friend, who asked to be identified simply as Gary, spent the afternoon reaching out to local newsrooms on behalf of the victim’s family to clear up misleading and false information that had been posted on a GoFundMe campaign by Ronald Todd Eskew better known as Najee Ali.

Gary, who didn’t want to give the name of the man who was killed out of respect for his family, said that he even called the police trying to get ahold of Najee Ali to take down the GoFundMe.

“He’s lying,” said Gary, who first saw the GoFundMe campaign online. “He [Najee Ali] told me the police told him it was a John Doe. If it was a John Doe, how would Harbor UCLA know to contact my friend, his brother?”

Gary continued, “He said he got the information from the people at McDonald’s.  I don’t believe him. He told me, I don’t need the money, I have plenty of money. As soon as I get out of my car I’m gonna take it down.”

According to Gary, the victim is not a 75-year-old veteran who lost his legs in a war as Najee Ali claimed on the GoFundMe page set up to raise money for the man’s funeral.

“I believe he lost his legs sitting out in Skid Row and a car ran over them. He was never in the war.  His older brother was a vet but the victim is 69 and he has a family.”

Gary says that when he called Najee Ali asking him to take it down, Ali told him that he could get the name of the victim from the coroner.  He says that Najee Ali told him the Black community was lambasting him for raising money for a white man and not for a Black man.

And like with so many other families with relatives suffering from untreated mental illness, Gary says that the real tragedy in all of this is how L.A. County failed the victim who suffered from severe mental illness after coming to Los Angeles about ten years ago.

“My friend was constantly trying to get his brother institutionalized,” explained Gary “The system completely failed him. Completely failed him. And every time they would call to say we have your brother, low and behold he’d be out.  They always dreaded that something like this was going to happen.”

Ali has since taken the GoFundMe account down.  How much money was raised, if any, in the time the campaign was active is unclear and if that money was returned to the donors.

Gary says the family has the money to bury the victim and would not have launched a GoFundMe page.  He says they need privacy to grieve in peace.

Ali called a press conference on Monday evening sending the following out to the media:

“Project Islamic H.O.P.E and a coalition of South Los Angeles community leaders will call for justice and the public’s help in  the murder  of the still  unidentified homeless man and veteran who was a double amputee and shot in the head while he was sleeping in his wheelchair last week outside a South Los Angeles McDonald’s.  He died this morning it was confirmed by LAPD officials.”

According to news reports, the police said that two female suspects, one in her 20s, drove up to the McDonald’s, got out of the car, approached the victim and fired one shot before driving off.

As of now, the suspects in the murder of the victim have not been caught.

UPDATE: Gary spoke with Boyd’s Funeral home in South Los Angeles where they confirmed that Najee Ali had contacted them to help with the funeral for the victim and that people were calling to make donations.  Gary confirmed with the funeral home that the victim’s funeral services were being planned by his family and would be private and that Najee Ali was not authorized to organize his funeral or solicit donations on their behalf.