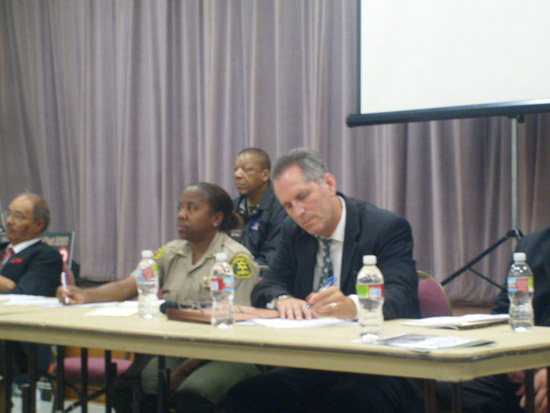 Monday evening the National Association for Equal Justice in America (NAEJA) held its regular meeting in Compton, this time with some very special guests.

The Los Angeles Sheriff’s Department’s Office of Dependent Review’s Michael Genacco didn’t know what hit him when he came face to face for the first time tonight with Michael Richardson, the father of Mitrice Richardson whom he accused in the news of altering the audio tapes featuring Mitrice’s mother talking to Sheriff’s deputies.  This after his office concluded that the Lost-Hills Malibu Sheriff’s deputies acted within department policy regarding the now deceased Mitrice Richardson.

In front of a standing room only crowd, I sat and listened for an hour as Genacco tried his best to dodge the many questions and accusations hurled from the audience regarding the murder of Mitrice and his office’s actions.

The only thing missing was popcorn.

Genacco got exactly what he deserved.  I only wish his boss, his real boss, Sheriff Lee Baca, hadn’t been tipped off beforehand.  Baca was scheduled to attend the same meeting but was a no show after KTLA showed up and he got the word that the Richardson family was there.

Now let me tell you about Michael Genacco.  He’s white and what I noticed is that he has a bad case of talking down to Black people.  So bad that a lot of the Black people felt compelled to run off their pedigree before addressing him for some reason.  I really hate when we feel that we have prove somehow that we’re worthy to address a public servant by way of our college degree.  But I digressed.

When Michael Richardson addressed him he couldn’t even look at him.  Instead he played with his pen while looking down the entire time he was speaking to him.  And that scenario pretty much played out the same with each person who addressed him.  So much so that Compton Councilwoman Barbara Calhoun called him out about it.

He didn’t have any answers, although he repeatedly told the audience they were asking “very good questions.”

He seemed to get the most worked up over the comparison of Mitrice’s treatment with that of Malibu.  He told the audience how that case was his and he knew it backwards and forwards.  He actually seemed quite pleased with himself while he was talking about it.  He knew more about that case than Mitrice’s, I’ll tell you that much.

Kudos of the night goes to Dawn the Self Esteem Queen who unrehearsed but provoked oratory was worthy of a standing of ovation and not the police’s ever so slightly movement in attempting to protect Genacco from her.  Yeah—we caught that.

Anyway, as we get ready to remember Mitrice Richardson on the one year anniversary of her initial disappearance beginning Thursday through Friday, and while they were able to identify the remains of babies wrapped in newspaper found in Korea Town allegedly there since the 1920s with the help of a few good forensic scientists, and while Chelsea’s Law is now law, and it hasn’t even been a year since her murderer was captured, there is still no justice and no news about who killed Mitrice Richardson—that Black girl who died—no scratch that—was killed in Malibu.  Yeah—that one.  I’m just saying.