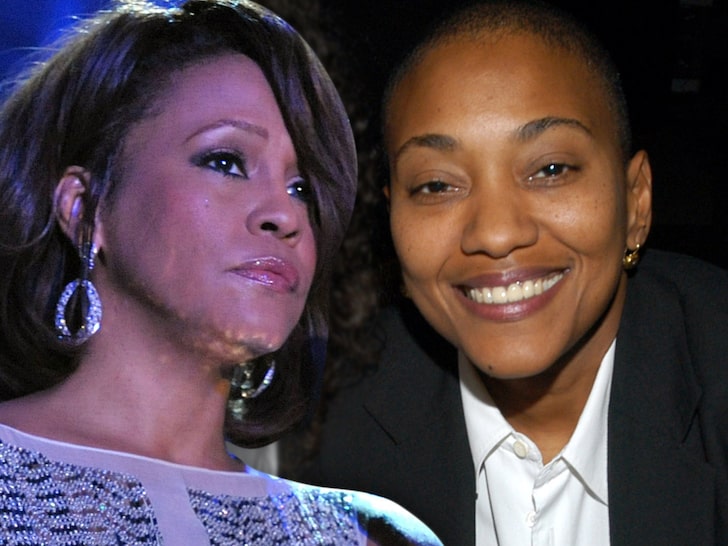 Following the release of excerpts from Whitney Houston’s best friend Robyn Crawford’s forthcoming memoir Song For You: My Life with Whitney Houston, some fans of the iconic singer are losing their damn minds.

Whitney Houston had a sexual relationship with a woman–get over it. Periodt.

For some of us, that’s not exactly breaking news–but I realize for most it might be.  But what it’s not, is an excuse to act a damn fool and point the finger at Robyn who is only sharing her truth.

When I posted the news of Robyn Crawford’s forthcoming book and a few of the excerpts on my Facebook page I was astounded to read the multitude of comments accusing Robyn of “besmirching” and “ruining” Whitney Houston’s image.  Some even had the nerve to say that because Houston isn’t alive Robyn shouldn’t say anything. My favorite comments were the ones that accused Robyn of making money from telling her story. Well, who the hell else is supposed to profit off of her story?  Bobby Brown?

If admitting to drug use on national television, Whitney’s now infamous comments about crack being whack, her being routinely photographed looking like a hot mess including once with blood dripping down her leg, coupled with the singer’s reputation in her final, drug-addicted years that ended with a “small spoon with a white crystal-like substance in it and a rolled-up piece of white paper” being found in the bathroom where she died and the coroner’s report that she was “acutely intoxicated from cocaine” at the time of her death and was a “repeated cocaine user” didn’t besmirch or ruin Whitney’s image–being in a loving relationship with another woman shouldn’t.

And I’ll just add that many of Whitney’s well-known and documented “troubles” didn’t take place while she was in a relationship with another woman.  No, all of that happened when she hooked up with Bobby.

But leave it to my people to go out of their way to overlook all of that other stuff–like we often do when we can’t or don’t want to handle the truth (R. Kelly, Michael Jackson) and hone in on what really matters–Whitney Houston engaged in a sexual relationship with a woman. And yeah, I said my people which is code for Black people because we are the only people making this an issue. Let’s just call a spade a spade.

According to Robyn, Whitney ended the physical part of their relationship in 1982 after she signed a record deal with Clive Davis at Arista.

“She said we shouldn’t be physical anymore,” writes Crawford, “because it would make our journey even more difficult.”

“She said if people find out about us, they would use this against us,” says Crawford, “and back in the ’80s that’s how it felt.”

Well based on the comments I’ve been reading, you’d think not much had changed 37 years.

Just because Black America has some wholesome heterosexual propelled image of Whitney Houston that they don’t want to be changed doesn’t mean Robyn should keep her truth to herself if she doesn’t want to.  It was her life and her relationship as well. None of the people going in on Robyn over her book spent the time with Whitney that she did or knew her like she did.

Was Whitney gay? Was she bisexual, pansexual or just fluid? Did she force herself to acquiesce to a life that was more acceptable to her religious beliefs, family, friends and fans? We’ll never know. But if she did, she wouldn’t be the first celebrity to have done so or to have died in the closet (rest in peace Luther).

Was Whitney gay? Was she bisexual, pansexual or just fluid? Would she still be alive if same-sex relationships had been accepted in the Black community?

Did she force herself to acquiesce to a life that was more acceptable to her religious beliefs, family, friends and fans? We’ll never know. But if she did, she wouldn’t be the first celebrity to have done so or to have died in the closet (rest in peace Luther).

Loving someone and having to keep it a secret is not easy to do when the person is not the best-selling music artist of all time.  It’s even harder watching the life choices they make and having no power to do anything about it. We lost a singer we loved to watch and listen to—Robyn lost all of that plus a best friend and a lover.

In published excerpts from her book, Robyn says “I’d come to the point where I felt the need to stand up for our friendship. And I felt an urgency to stand up and share the woman behind the incredible talent.”

So what if it took her seven years to reach the point where she felt like she could finally talk about it.  Robyn is 58 which means she comes from a generation of sexually repressed Black women who loved women but who didn’t grow up being out and publicly embracing their sexual orientation and relationships.  That’s a relatively new phenomenon thanks to the work of earlier generations of Black LGBTQ/same gender loving activists including Boomers and Generation Xers that Millennials and Gen Zers today are taking advantage of. So this might very well just be HER time.

Fans of Whitney Houston do a disservice to the singer by shunning and criticizing one of the few people in her life who loved her unconditionally and whom she clearly loved in return. It also continues to reinforce the message that being in a same-gender-loving relationship when you’re Black is still not accepted in our communities and families. It doesn’t matter who Whitney Houston loved, all that really matters is that she loved and was loved.  For a time that love was with a woman. Knowing this now isn’t going to change how good her music sounds to you when you listen to it so get over it.

And Robyn girl, I pre-ordered that book! F–k the haters, tell your truth.