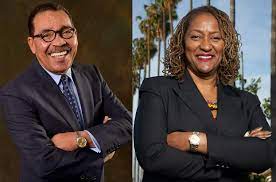 Earlier this year, ahead of the March primary, in my voter guide I endorsed three candidates running for Los Angeles County Supervisor to represent the Second District–former L.A. Councilwoman Jan Perry, Senator Holly Mitchell, and L.A. Councilmember Herb Wesson.  I had my reasons.  I know all three. I respect all three and I felt that we would have done well with either one of them at the helm.

However, for the general election, I am taking the same advice I’ve been doling out to you about getting off the fence. I chose a candidate and that candidate is Councilmember Herb Wesson.

The Second District seat is one of only five seats that collectively manage Los Angeles County’s $30 billion annual budget. This is a budget that pays for everything from the Department of Public Health, Mental Health and Health Services which oversees the county’s hospitals and clinics to the district attorney’s office, public defender’s office, Probation Department, Sheriff’s Department, Department of Children and Family Services and more.

So we need someone in that seat who is going to make sure that the Second District gets its fair share of the County’s considerable resources and budget.

We need a supervisor who will assemble a team of people who will give their very best to the residents of the Second District.

We need a supervisor who will listen to the people and be accessible.

Most importantly, we need a supervisor who can get along with people and has the ability to get things done.

You don’t want an outsider telling you who to vote for.  You want someone who can speak from first-hand knowledge and experience about who a candidate it is.

I can do that with Herb.

I’ve known since my days working in the California State Assembly for then Assemblymember Mervyn Dymally.  Herb was the Speaker of the Assembly at the time. His wife Fabian worked with me in Dymally’s office.  So my relationship with the Wesson’s stretches back some time.

Last year he asked me to join his staff at City Hall and I was pleased to do so and it’s been quite interesting.

I’ve gotten to see what kind of people Herb brings together and the dedication that his staff has to the 10th District of Los Angeles. As someone who has worked for several elected officials at all levels of government, I can tell you that an elected official is only as good as the people they have working for them.

From day one when I came to work with Herb, I can tell you that I was in his ear about district attorney Jackie Lacey. It took a lot of cajoling and hearing directly from constituents, but Herb finally retracted his endorsement of Lacey.

Now some of y’all are going to say that he should have never endorsed her in the first place.  True. But, you want a leader who recognizes their mistakes and is not afraid to course correct and do the right thing.  Herb could have ridden that endorsement of Lacey out all the way to Election Day but he didn’t.  He listened to his community and acquiesced.  That’s being a leader for the People.

Some of y’all are also going to point out I work for him. Yes, I do. I have always made that quite clear. I am not being paid to write this and remember, in the primary election I endorsed three people–including Herb Wesson and still kept my job. Trust me, you want the people who work with the candidates and see them when the cameras are off to tell you if they’re up to the job they’re running for.

I am just simply going to say this–I know Herb, I know how he works.  I know his heart. I know that he can get the job done.  I also know that he’ll assemble a great team of folks from the community to represent and serve the Second District.

I believe that if Herb is elected he’s going to build on what’s he’s done in the Los Angeles City Council, particularly around homelessness and criminal justice reform–two issues near and dear to my heart.

So whether you vote early or on Election Day, by mail or at the polls, join me in voting for Herb Wesson for Los Angeles County Supervisor in the Second District.