He came to California to be rich--and for a time he was. After suffering a stroke, he's on the verge of being homeless after falling prey to a room-for-rent scam in South Los Angeles. 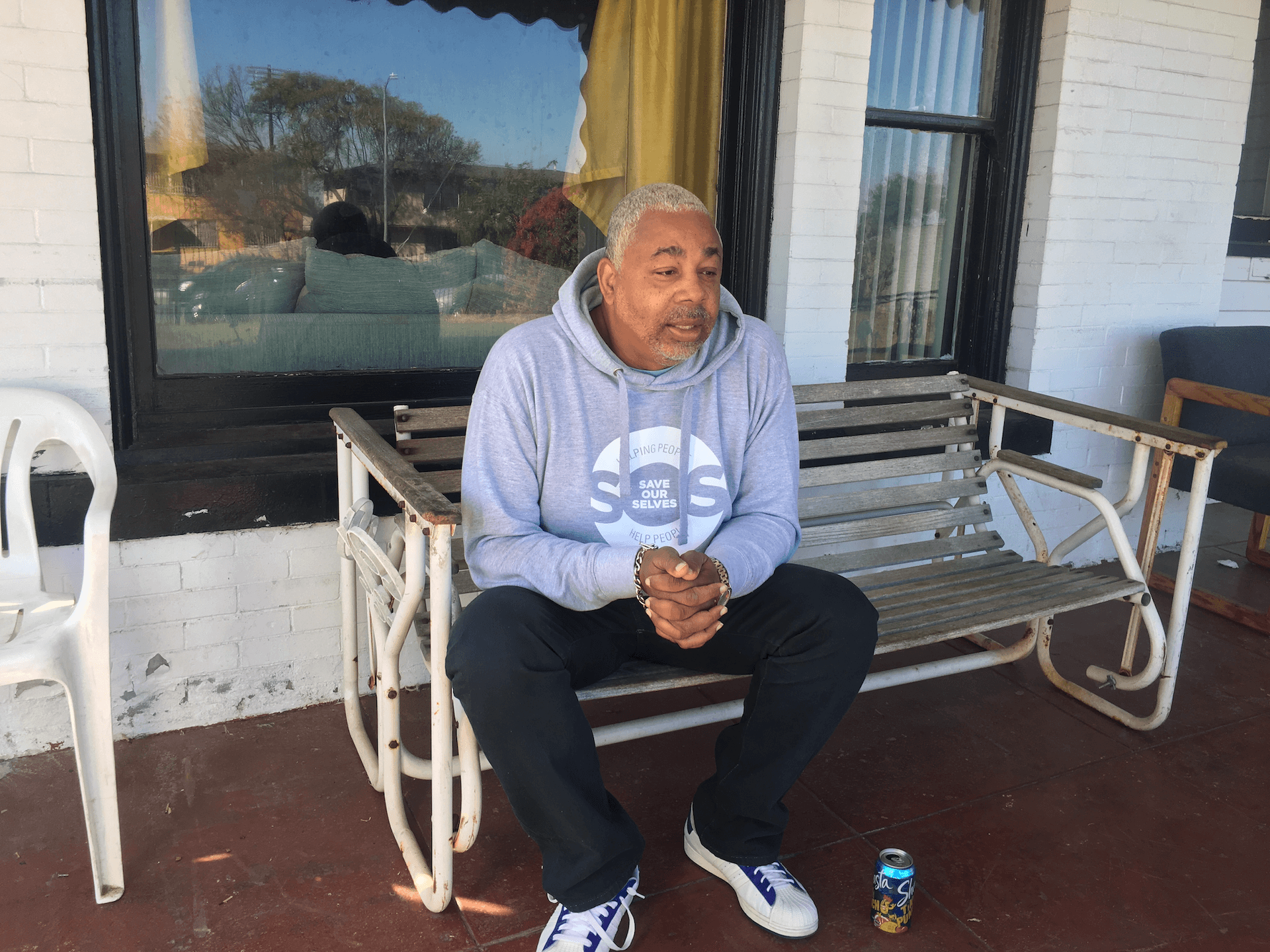 Vincent Cook:  I Came to California to Be Rich

If you ask Vincent Cook about the first 56 years of his life he’d probably tell you his proudest moments were being handpicked by the late comedian Richard Pryor and singer Luther Vandross to be their opening acts during their respective tours. But mention former U.S. President Bill Clinton and Cook lights up and smiles as he recounts opening for Clinton during one of his California Primary appearances.

Today, sitting on on an old rickety porch swing in front of a dilapidated boarding home in South Los Angeles, the words don’t flow as easily for Cook who, as an accomplished comedian and actor, was never at a loss for words.  But after a debilitating stroke in 2014, he’s never been the same.

Cook is one of about a dozen tenants living in nearly 4,600 square foot home on the border of Inglewood in the city of Los Angeles that’s been abandoned by the property manager after she failed to pay rent causing a court to order her eviction.

Facing an inevitable eviction after falling prey to a room-for-rent scam, nearly all of the tenants in this home–that was sold to them as transitional housing–are on SSI or disability benefits and public assistance–most receiving just $221 per month. The rent?  Well that depends on how much you are receiving.

Residents receiving General Relief pay between $175 to $200 of their $221 monthly benefits for a bed bug infested mattress on the floor in a shared room. The accommodations for those who receive more money isn’t any better–they’re just charged more for it.  Cook pays $350 to sleep on the floor of a room he shares with a stranger.

Still, it’s seen as a deal for those who can no longer afford to rent an apartment in sixth most expensive rental market in the U.S. where in 2017 the median price for  a one-bedroom in Los Angeles was $2,077 while for a two-bedroom it was $3,099.

And even though he is on the verge of being homeless, Vincent Cook is the house’s most optimistic resident believing that he can get back to where he was at the height of his career.

Once at the top of his comedic game, today Cook lives off of his meager Social Security monthly allowance–the bulk of which goes towards rent.

Boasting an impressive resume, it’s hard to believe that the one time accomplished boxer, comedian, actor and filmmaker who was once an in-demand entertainer found himself homeless.

“I came to California to be rich,” Cook says with a smile. “And I said I was  going to be rich and guess what? I was rich.”

An online search on Cook revealed that he was once featured in Starz Entertainment’s stand-up comedy series, “Martin Lawrence Presents 1st Amendment Stand-up.” As a popular comic, Cook was tapped to perform on the groundbreaking television shows as “The Apollo Comedy Hour,” BET’s “Comic View,” HBO’s “Def Comedy Jam” and “Showtime At The Apollo.”  Once a contributing writer on BET’s hit comedy soap opera “Blackberry Inn,” Cook was chosen for the starring role of Jewel in the series.  His silver screen appearances included “B*A*P*S,” “Tears of a Clown” and after being personally selected by “Ali” director Michael Mann, playing Jimmy Ellis, Muhammad Ali’s famed sparring partner and former heavyweight champion of the world.  During the making of “Ali,” Cook, whose bio online says that he once won a gold medal for the United States Boxing Team and was proclaimed a Golden Gloves Champion, realized a childhood dream when he received the opportunity to meet his boxing idol Ali.

Veteran actor John Amos hired Cook to co-star as the zany attorney Cousin June Bug in Amos’ 2004 film “The Watermelon Heist.”  His last listed film credit on the Internet Movie Database was five years ago for a film he wrote and directed titled “Up in the Club.”  He suffered a stroke in 2014 shortly after its completion.

The details of when and where it started to go wrong for Cook he can’t quite articulate.

For a minute his demeanor changes as he talks about the death of his friends comedians Ricky Harris and Reynaldo Rey.  Harris died in 2016 from a heart attack, Rey from complications of a 2014 stroke in 2015.

He mentions a wife.  A brother on crack cocaine that he lived with in downtown Los Angeles for a few months following his stroke.  He says his brother was evicted.

A Go Fund Me campaign from nearly four years ago set up by his brother says that Vincent was in a coma for ten days and has medical bills of over $250,000, including therapy and seven medications, that won’t be covered by medical insurance.  In updates on the campaign’s page, a smiling Vincent can be seen alongside his wife and 10-month old daughter.

Attempts to locate Cook’s wife and brother have failed.

When asked how he ended up at the house on Crenshaw Boulevard Vincent says that the hospital he was in arranged it.

Struggling to say the name of the hospital, “New Way–Norwa–they arranged it,” he explains.

“They asked where I wanted to be dropped off and I said that I didn’t have a place to be dropped off. I told them if they had a place that I would look forward to being there and they said okay.  So they called up a woman.  Her name was Giovanna Wilkerson.  The first thing she asked me was did I have any money. I said hold up a minute and I gave them back the phone and I said I didn’t know her.  She told the hospital they would work with it out with me.  That was the first time that I talked to her.”

He continued, “The second time I saw her she asked if I had any money. I said sure and I gave her the little bit of money I had in the bank. So said she was going to get me a receipt and I’ll see you shortly.  Shortly turned into two weeks.  I hadn’t saw her for two weeks and she came and asked where’s the rest of the money.  I asked if she wanted me to get it and she said yes.  So I went back over there and got all the money out of the window and gave her the rest of the money.  She said, ‘I am comfortable with you now.’  She came up with a receipt and some kind of guarantee and that was that. I was here.”

Cook, along with a dozen or so residents all claim that Giovanna Wilkerson promised them transitional housing that included a clean living environment, meals and even job assistance. Residents were asked to sign Transitional Housing Agreements and made to give Ms. Wilkerson access to their government assistance and bank accounts so she could check each month to see when and how much money they received.

Shalana Little, 30, who has been living at the same South L.A. house as Cook added, “Whoever collected any type of government assistance–whether it’s SSI or GR–she would ask for your card number and the number on the back just in the event you were late on your rent or whatever–she would check.  She would have the number to check and see if you were lying or not and if you didn’t pay your rent.  She always asked for everyone’s information involving any type of income.”

Little says that it was mandatory for residents to disclose to Wilkerson their debit card numbers, pin codes–including for their Electronic Benefit Transfer or EBT which is used in California is to issue food stamp and cash benefits to recipients.

After a notice to vacate was posted, she collected rent and disappeared.  The Crenshaw house is believed to be one of several similar businesses she runs in South Los Angeles.

A Los Angeles Times profile on Wilkerson and her husband show that she had early ambitions of owning property in South Los Angeles.

Wilkerson was known for indiscriminately renting to anyone who had the money, often times putting drug users, sex offenders, disabled and the elderly in the same room.

Back at the house on Crenshaw, sitting on the porch Vincent Cook reminisces about his past.

#LIVEat5: Former comedian Vincent Cook used to open for @richardpryor. But 3 years ago he had a stroke and ended up at a transitional rent-by-room home with deplorable conditions. Now he and others could be evicted because he says the landlady took their rent money and ran. @ABC7 pic.twitter.com/r4jCi0aNZ8

Cook is one of several tenants facing eviction after falling victims to a room-for-rent scam in Los Angeles. The residents have set up a legal defense fund to help pay their legal costs as they try to fight the eviction and buy more time to find somewhere to move to.  You can contribute by clicking here.