Lawsuit seeks $4 million for every lie told during trial 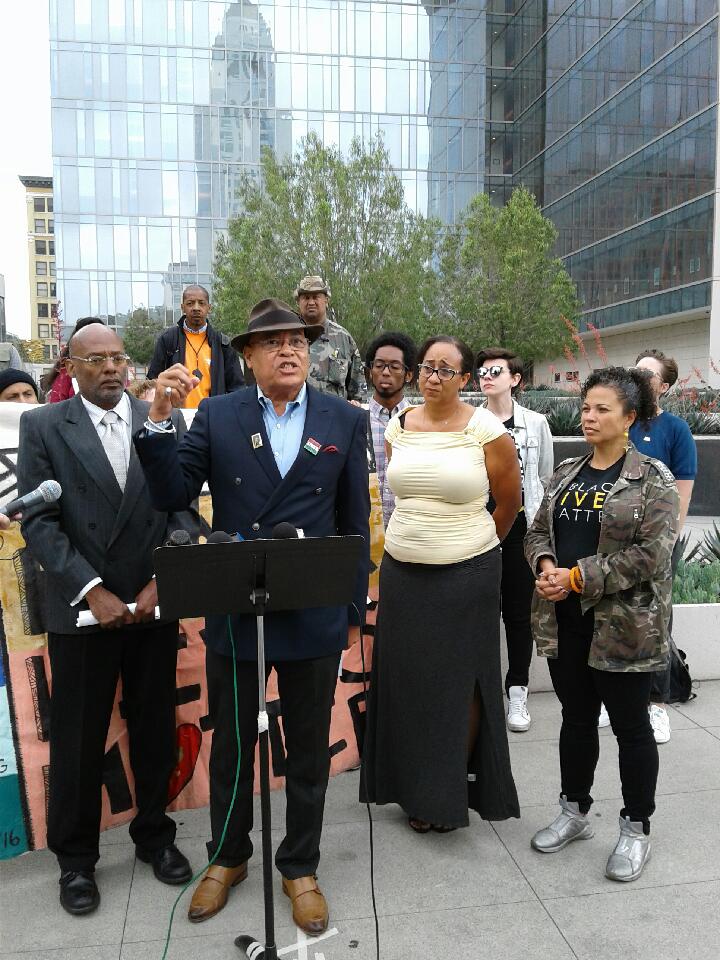 Civil rights activist and Black Lives Matter Los Angeles organizer Greg Akili held a press conference with his attorney Dermot Givens to announce a federal lawsuit against the City of Los Angeles, Los Angeles Police Commission and Los Angeles Police Department for Akili’s Feb. 9, 2016 arrest during a meeting of the police commission. Akili was arrested after verbally challenging commission president Matt Johnson for giving warnings to audience members. In January, a jury deadlocked on charges of battery on a peace officer that was followed by a motion from the City Attorney’s office to dismiss the charge all together.

According to the lawsuit, Richard Tefank, Executive Director of the Los Angeles Police Commission, orchestrated the violation of Akili’s civil rights that included Tefank and multiple officers lying under oath during the trial that Akili battered an officer. On a video of the incident Tefank and can be heard telling Los Angeles Police Chief Charlie Beck that he [Akili] needs to go to jail.

Even though the battery charge was dropped, no charges for perjury have been brought against Tefank or the officers who lied under oath that they saw Akili batter the officer.

The lawsuit alleges false arrest and multiple constitutional violations and seeks $4 million in damages for according to Akili’s attorney Dermot Givens, “every lie told under oath during the trial.”

About a dozen people have been arrested during commission meetings in the past year, either on suspicion of resisting an officer, battery on an officer or refusing to disperse, according to a review of LAPD records by the Los Angeles Times.

Gregory Akili, is a nationally known and respected community organizer who worked as an organizer for the United Farm Workers (UFW) under the leadership of the late Cesar Chavez. With the encouragement and support of Cesar, Akili helped form the United Domestic Workers (UDW) union in an historic effort to improve the working conditions and safety for thousands of African-American and Latino female home care workers throughout California. He served as National Organizer for Jesse Jackson’s 1988 presidential campaign and Western Regional Field Director for the NAACP.