Monday criminal defense attorney Seymour Amster made an appearance at the meeting of the West Hollywood City Council to defend his client Ed Buck against what he referred to as "character assassination." 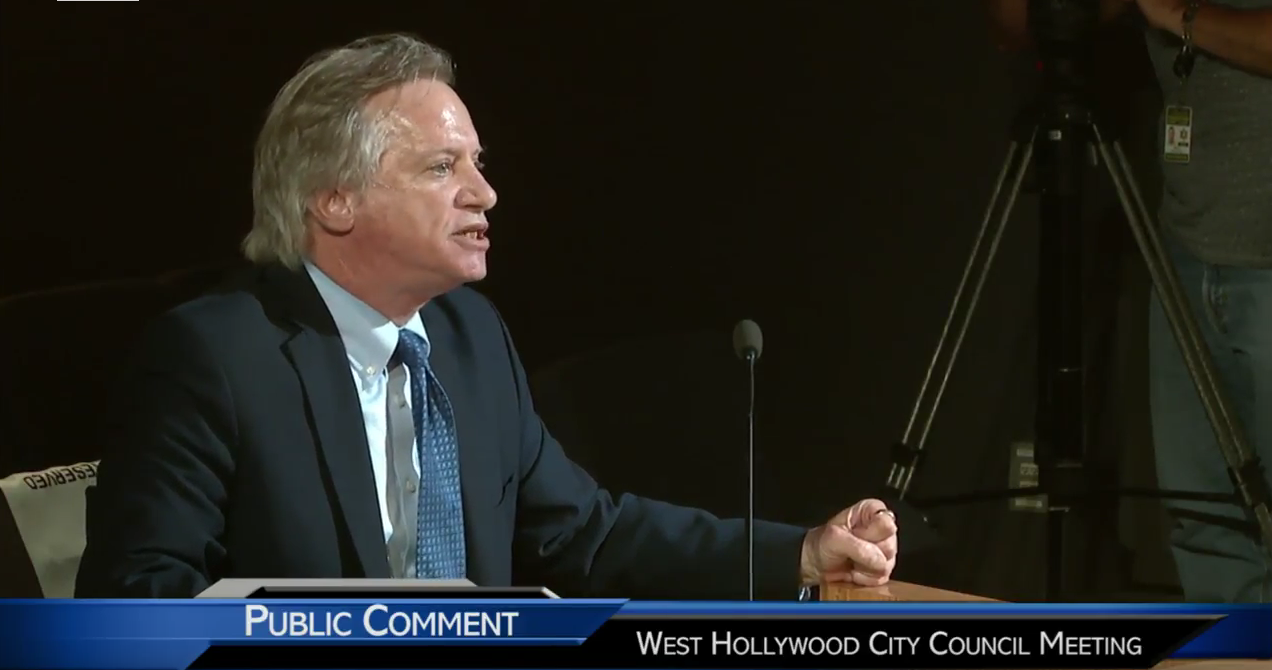 Monday criminal defense attorney Seymour Amster made an appearance at the meeting of the West Hollywood City Council to defend his client Ed Buck against what he referred to as “character assassination.”

Ed Buck is the prominent Democratic donor at the center of the scandal involving the overdose death of Gemmel Moore.  Moore was found dead of a crystal meth overdose Buck’s West Hollywood home on July 27. His death was immediately classified as an accidental methamphetamine overdose by the coroner, but now the Los Angeles County Sheriff’s Department’s homicide bureau is taking a closer look after his personal journal was published and other young men have stepped forward.

Amster, who most recently represented serial killer Lonnie Franklin more commonly referred to as the Grim Sleeper and is now charged with representing the WeHo Creeper, demanded to know if West Hollywood City Councilmember Lindsey Horvath was involved in what he referred to as “instigating, promoting or financing the character attacks on Mr. Buck.” He told the City Council that his office sent in a request for an ethics investigation of Councilmember Horvath for failing to disclose that Buck had in the past opposed her candidacy.

FACT: In 2007 Buck made an unsuccessful run for a seat on the City Council. Buck might also be bitter that he opposed Horvath’s election to the City Council and she won anyway.

Amster went onto accuse Horvath of using her public office to attack a “private citizen” much like President Trump after demanding that all of her communications be subpoenaed via a grand jury.

That’s a stretch even in my line of work. I love a good spin attempt but this is just grasping for straws and reeks of desperation.

So Ed Buck could find the wherewithal to send his attorney to attack and threaten Councilmember Lindsey Horvath, but he couldn’t find it in himself to send condolences to his “good friend” Gemmel Moore’s family after Moore died in his home.  That part.

FACT: Councilmember Horvath is the only member of the West Hollywood City Council who has never taken money from Ed Buck. She boldly stepped up when others would not in West Hollywood and asked for a complete and thorough investigation into the claims against Mr. Buck surrounding the July 27 crystal meth overdose death of 26-year-old Gemmel Moore in Buck’s apartment–including supporting immunity for other victims of Buck who have come forward.

Below is a just a partial list of the money given to current members of the West Hollywood City Council by Ed Buck.

Amster said that his client Ed Buck hadn’t been accused of anything.

FACT: Other young Black gay men have stepped forward and made very serious allegations against Ed Buck including recounting similar stories about a man who they say has a Tuskegee Experiment like fetish which includes shooting drugs into young Black men that he picks up off the street or via dating hookup websites. Buck has been accused of being a sexual predator, kidnapping, forced drug use, injecting unconscious Black gay men with crystal meth, filing false police reports to cover his crimes, coercion and pimping and pandering by his victims. These other victims are in the process of making statements to Los Angeles County Sheriff’s Department homicide detectives.

Gemmel Moore himself wrote about Ed Buck in his personal journal.

Buck’s attorney reminded the West Hollywood City Council that his client hadn’t been charged with a crime.

FACT: Ed Buck has not been charged with a crime…yet.