20 Years After Disbanding its Police Department, Compton Leaders and Residents Fed Up with Sheriff’s Take to the Streets

On June 7 over five thousand people participated in a march against police brutality–but to be more specific–sheriff’s deputy brutality. 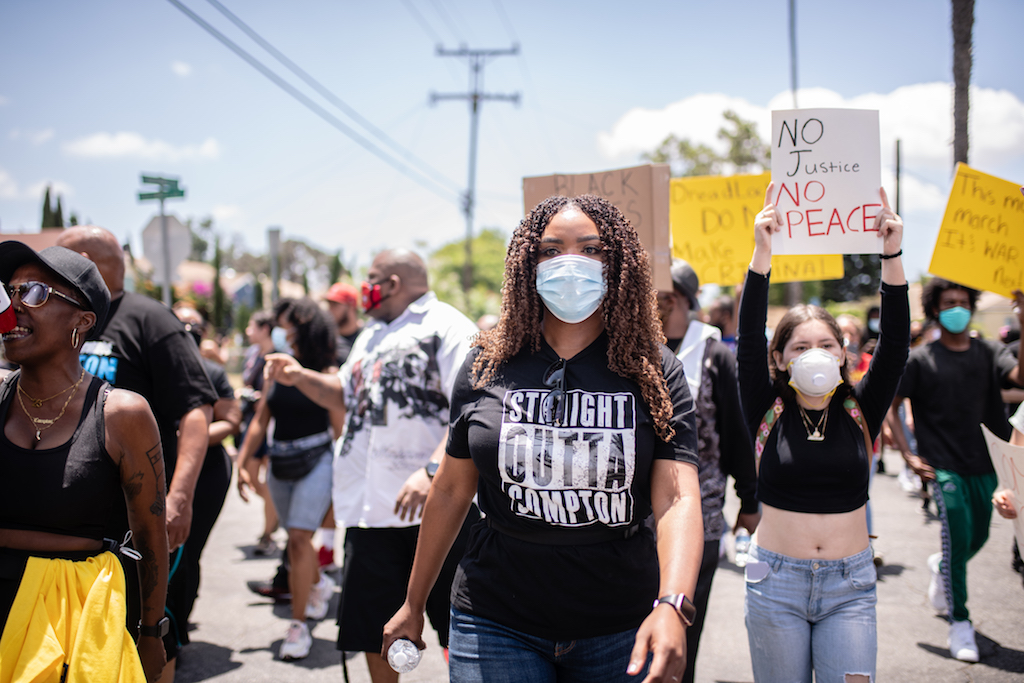 At the time, the $12.3-million contract with the city of Compton was the most expensive among the 41 cities patrolled by the Los Angeles Sheriff’s Department.  Led by then-Mayor Omar Bradley, the five-member City council voted 4-to-1 in July 2000 to disband the Compton Police Department in hopes of getting a handle on the high homicide rate that had gripped the city and kept residents indoors in fear of their lives. Twenty years, Compton taxpayers are paying $22 million a year to the Sheriff’s Department with only Lancaster coming in higher at $24 million for a city of 94 square miles and 150,000 residents.  At 10 square miles and 100,000 residents, Compton is paying the most money per resident and geographic area.

Today Compton residents and elected leaders no longer look at the Sheriff’s Department as the answer, but more as the problem.

On June 7 over five thousand people participated in a march against police brutality–but to be more specific–sheriff’s deputy brutality.

Led by Mayor Aja Brown and Councilwoman Michelle Chambers, thousands walked the 1.3 miles between the Gateway Center and the Martin Luther King Jr. monument in front of the courthouse.  Among the marchers were Grammy award winner and Compton native Kendrick Lamar.  He was joined by fellow Compton native DeMar DeRozan of the San Antonio Spurs and Houston Rockets Russell Westbrooks.

But celebrities were outnumbered by Compton’s everyday citizens who are fed up with the lack of consequences faced by sheriff deputies who kill and victimize residents.

The victim turned out to be 24-year-old Dalvin Price who said that on May 31, he was just going home when the sheriff’s pulled him over.

The cellphone recording begins when Price has already been forced to the ground by two deputies. Price can be heard on the recording saying, “I’m on the ground,” as a third deputy joins and begins to strike Price’s right torso with his knee.

Deputies broke several of Price’s ribs and then made him sit in a Sheriff’s patrol car for five hours after the incident, which happened around 11 p.m. near the intersection of Rosecrans and Pearl Avenue.

L.A. County jail records show Price wasn’t booked until six hours later, on the morning of June 1. He was released without a charge.

“I was trying my best to comply with everything they were saying but I was still treated like I didn’t have any rights,” said Price at a press conference last week. “I was very scared. I knew I was innocent. I knew I didn’t do anything wrong. They treated me like an animal, like I wasn’t a human being.”

Last week, Price stood alongside his grandmother and the woman who caught the incident online and told the media about the harassment they’ve experienced since the video became public.

“Since I pressed that record button, my life has been turned upside down,” said Asia Hall, the Compton resident who recorded the video.

Both she and Price say they have seen squad cars parked outside their homes and are in fear for their lives.

Among the demands made on behalf of the residents of Compton was that the deputies involved in the beating of Dalvin Price be immediately transferred out of the Compton Station while the investigation is pending.

Other demands include requiring that a majority number of the Sheriff’s deputies assigned to Compton have a certain amount of years experience and that the Sheriff’s Department stops sending new deputies to Compton and using the city as on the job training. They also want all of the patrol cars in Compton to have the city’s seal on them like in other cities the Sheriff’s services are contracted in.

“It’s time for the Sheriff’s Department to be accountable to the cities that contract their service,” said Mayor Brown.  “In Compton, we’re not even allowed to dictate our own priorities as it relates to law enforcement.  The sheriff tells us what the priorities are and it should be the other way around. For far too long the Sheriff’s Department has gone unchallenged regarding their accountability to the cities that pay them millions and millions of dollars each year.  We are their bosses and not the other way around.”

“Compton residents deserve and demand equitable treatment. We are tired of dodging sheriff’s cars that have no regard for traffic laws or personal property, being snatched out of our cars, having our vehicles illegally searched, being threatened and intimidated, beaten and in some cases murdered,” said Mayor Aja Brown. “We demand the same treatment that deputies provide to the residents of Malibu, Rancho Palos Verdes and other affluent communities. And, according to the size of our contract with the Sheriff’s Department, we have $22 million reasons to expect it.”

“The City currently contracts with Sheriff’s Department for law enforcement services at a price tag in excess of $22 million but incidents like what occurred with Dalvin Price are unacceptable and we will not tolerate it,” said Compton City Attorney Damon Brown. “The taxpayers of this City will not fund our own destruction and dehumanization. We expect our tax dollars to be used for our protection and for law enforcement to work cooperatively with City leadership to improve safety and quality of life. For this relationship between the Sheriff’s and the City to continue, there must be accountability.”

At Sentinel press time, the Compton City Council was poised to consider an ordinance to establish a 11-member Law Enforcement Review Board that in alignment with Compton’s commitment to maintaining a safe environment for all of its residents and recognizing the need for police reform, would independently review allegations of misconduct and increase accountability and trust with the public, and those that provide law enforcement services in Compton.